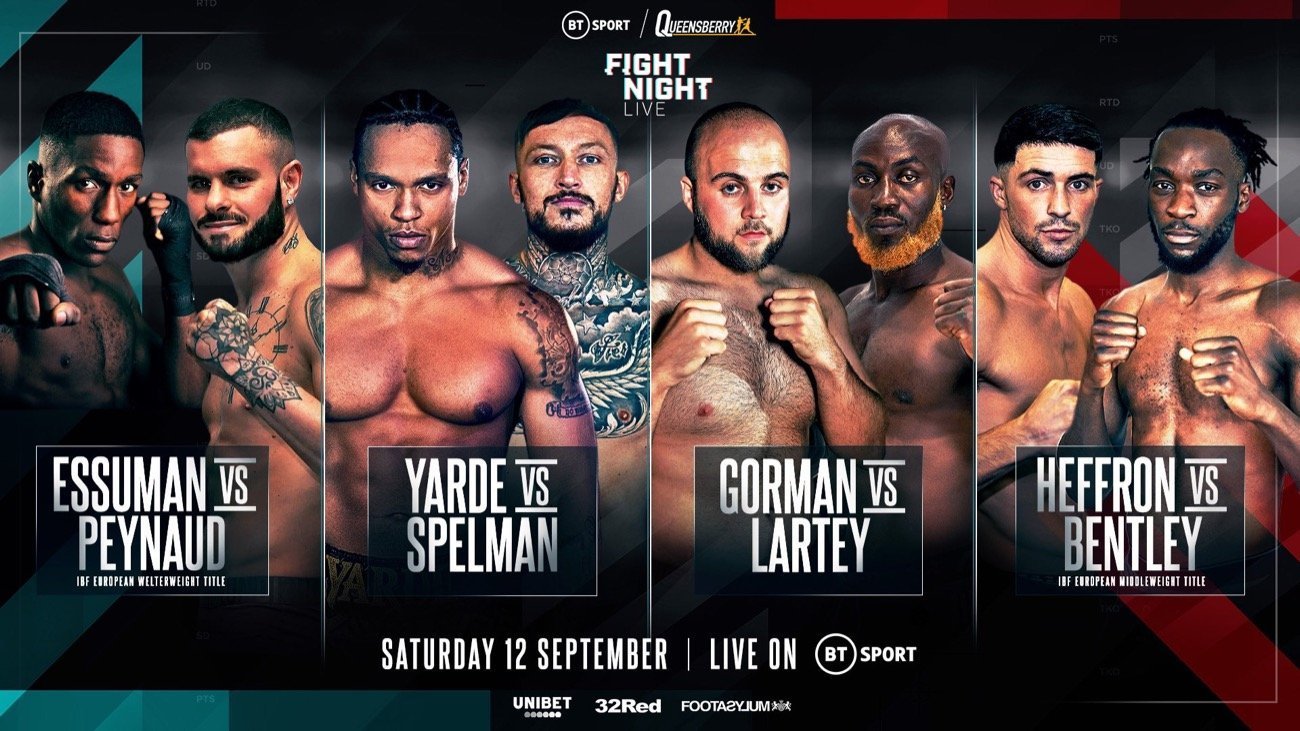 Now that all the participants are weighed-in, and confirmed covid-free, Hall-of-Fame Promoter Frank Warren’s incredible run of shows can continue live, tomorrow night on BT Sport 1 from 7.30pm.

In the main event of the evening, ‘The Beast from the East’ Anthony Yarde will meet one of Britain’s hardest men Dec Spelman, before hopefully moving on to a domestic dust-up with Commonwealth Champion Lyndon Arthur later in the year.

Elsewhere on the card, Mark Heffron and Denzel Bentley will do battle in a British eliminator for the Middleweight crown currently worn by Welshman Liam Williams.

Anthony Yarde vs Dec Spelman, Mark Heffron vs Denzel Bentley and Ekow Essuman vs Cedrick Peynaud have today all been announced for a bumper Queensberry Promotions card on September 12.

Anthony Yarde will take on Dec Spelman, in what will prove an ideal chance to directly compare himself against potential future foe Lyndon Arthur – who last month edged Spelman on points behind-closed-doors.

Yarde challenged for a World Title against Sergey Kovalev in 2019 and has been absent since his Russian mission – where he came within seconds of toppling the legendary champion.

The light heavyweight Beast from the East is now back in business against an opponent who extended Manchester’s Arthur to 12 rounds of work in July. Commenting on the fight on behalf of BT Sport on the night, Yarde complained over a lack of entertainment from the pair and that he needed paying to stay awake.

Yarde will be looking to provide more entertainment on September 12.

The vacant IBF European welterweight championship will be on the line for English champion Ekow Essuman when he goes in with the Frenchman Cedrick Peynaud. The Paris-based Peynaud took part in two epic struggles against Connor Benn across 2017-18 where both men were put to the canvas and it represents an ideal test for Essuman, who is in the British title mix along with Benn and the champion Chris Jenkins.

In what is a huge fight for the middleweight division in this country, a battle of the big punchers is confirmed between Battersea’s Denzel Bentley (13-0) and Oldham’s Mark Heffron (25-1).

For a fight that surely cannot fail to deliver fireworks, the IBF European title is the prize for the winner between two men who have not been shy in calling each other out across social media.

“This is a card with the potential to deliver for the fans watching on BT Sport in a big way.

“Boxing is a game of ego’s and Anthony is keen to show the world that he can go one better than Lyndon and blast Spelman out early.

“Spelman is not an easy fight for anyone, but if Anthony comes through we’ll be on course for Yarde vs Arthur later this year hopefully.”

“I am delighted to be bringing Anthony back because he needs a competitive fight before his big domestic showdown against Lyndon Arthur and he will be determined to do a better job on Dec Spelman than his rival. He has put the onus on himself to find an explosive performance after complaining about Lyndon’s fight with Dec being boring!

“I still firmly believe Anthony is a world-level elite operator and he will prove as much given time but, for now, he needs to keep busy and remind the public of what he is all about.”

“The people want explosive action and knockouts so I will not be hiding behind my jab and sending everyone to sleep,” stated the 19-1 man from Ilford.

“This will be all about me reminding people that I am the force of the division and I am heading right back to the top where I intend to dominate and reign for a long time to come.

“I respect Dec Spelman as a fighter but this is the chance for me to show everyone what they can expect when I get to share a ring with Lyndon Arthur.”

“If Yarde comes to fight then so much the better for me. Lyndon made our fight a technical affair that I was disappointed I couldn’t really get to grips with, so if Yarde wants some action then bring it on.

“I will actually be his first test at domestic level so we will see how he looks on the night.”