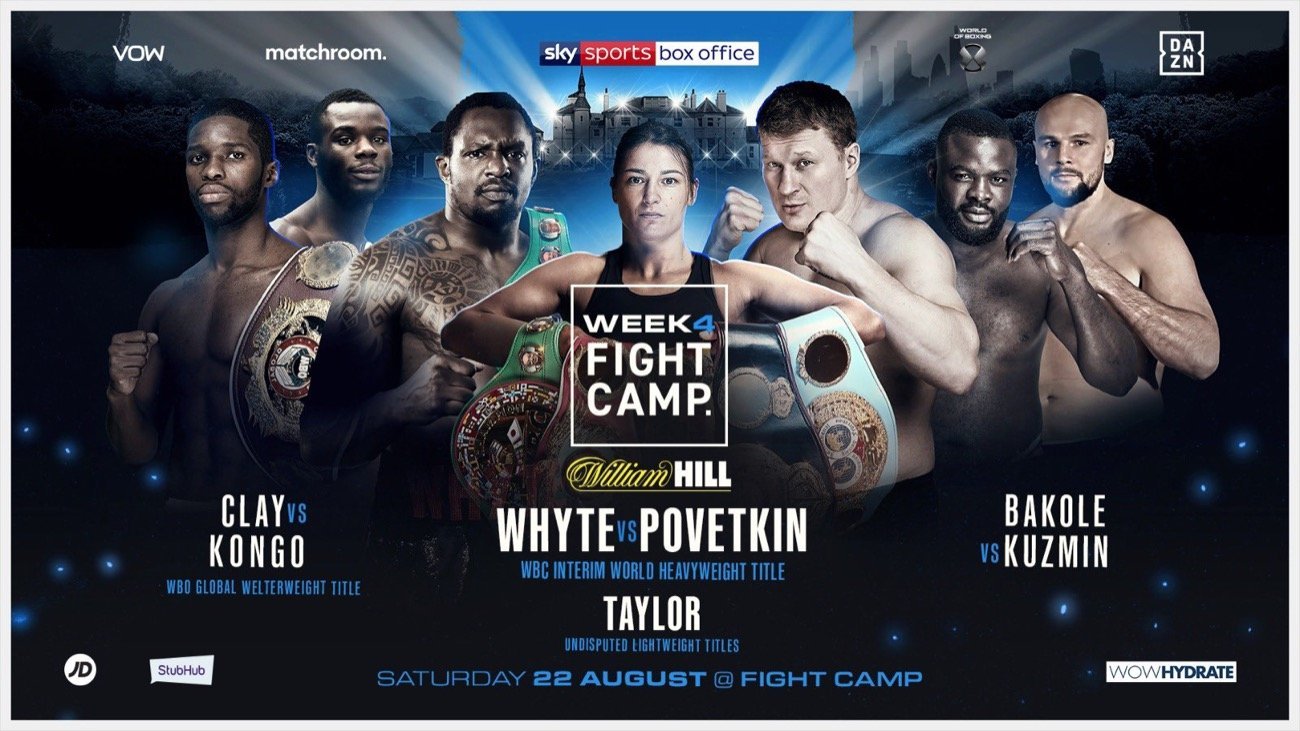 Boxing’s biggest doubleheader of the summer featuring Dillian Whyte vs. Alexander Povetkin and Katie Taylor vs. Delfine Persoon II is just over 24 hours away and all fighters have successfully made weight ahead of the final clash at Matchroom’s headquarters in Essex, England. Tomorrow’s event will be streamed exclusively on DAZN in the United States, as well as Austria, Brazil, Canada, Germany, Italy, Japan, Spain and Switzerland. The full five-fight card will begin on DAZN at 2 p.m. ET, with the co-main event expected to begin at 4 p.m. ET.

The event caps off a four-week stretch of competitive fights from Matchroom’s Fight Camp on DAZN. In the main event, Whyte (27-1, 18 KOs) aims to extend his impressive 11-fight winning streak but standing in his way is Povetkin (35-2-1, 24 KOs) who previously held a world heavyweight title for two years. The winner of this battle of Top 10 heavyweights becomes the mandatory challenger for the WBC world title strap held by Tyson Fury. In the co-feature, undefeated and undisputed world lightweight champion Taylor (15-0, 6 KOs) will meet Persoon (44-2, 18 KOs) in a rematch of their June 2019 all-action battle in New York City. Taylor retained her undisputed crown with a tight majority decision victory but many, from media ringside to fans across the world, thought Persoon won the hotly contested scrap. The rematch aims to settle the score.

The full card featuring five fights begins at 2 p.m. ET on DAZN. Ahead of tomorrow’s card from Matchroom’s headquarters in Essex, DAZN previews the matchup of the summer between Whyte and Povetkin, highlights Katie Taylor’s rise to undisputed status and presents the latest edition of DAZN REWIND featuring the full fight between Dillian Whyte and Oscar Rivas from last July.

DAZN has confirmed that the August 22 event headlined by the highly anticipated heavyweight fight between Dillian Whyte and Alexander Povetkin will stream exclusively on DAZN in the United States, as well as Austria, Brazil, Canada, Germany, Italy, Japan, Spain and Switzerland. The full card will begin at 2 p.m. ET.

Since coming up short in his first title attempt in 2015 against fellow Brit Anthony Joshua, Whyte (27-1, 18 KOs) has amassed an impressive 11-fight winning streak in pursuit of his next crack at the world title. Meanwhile, Alexander Povetkin (35-2-1, 24 KOs), who held a world heavyweight title for two years, has proven to be among the toughest in the division with his only two losses coming against Joshua and former heavyweight king Wladimir Klitschko. The winner of this battle of Top 10 heavyweights becomes the mandatory challenger for the WBC world title strap held by Tyson Fury.

In the August 22 co-feature, undefeated and undisputed world lightweight champion Katie Taylor (15-0, 6 KOs) will meet Delfine Persoon (44-2, 18 KOs) in a rematch of their June 2019 all-action battle in New York City. Taylor retained her undisputed crown with a tight majority decision victory but many, from media ringside to fans across the world, thought Persoon won the hotly contested scrap. The rematch aims to settle the score.

“It is a great time for women’s boxing, with compelling fighters and excellent matchups. Last year, we saw Taylor and Persoon deliver an absolute thriller at MSG and we’re proud to feature this rematch of elite athletes live on DAZN,” said DAZN EVP Joseph Markowski. “Coupled with the biggest heavyweight fight on the boxing calendar – Whyte vs. Povetkin, Fight Camp from the Hearn’s family garden is a can’t-miss event.”

“This is by far the biggest night of boxing since the sport has emerged from lockdown and it’s a huge coup for DAZN,” said Eddie Hearn, Managing Director of Matchroom Sport. “Fight Camp has been a colossal success and the Matchroom HQ will be the scene of a spectacular finale on August 22. In the chief support Katie Taylor rematches Delfine Persoon after their ‘Fight of the Year’ contender at MSG last June and in the main event World number one clashes with Former World champ, the dangerous Russian Alexander Povetkin. The WBC has already ordered Tyson Fury to face Whyte if he comes through Povetkin so the heat is on! Don’t miss it!”

Adam Smith, Sky Sports Head of Boxing Development, said: “Fight Camp ends with fireworks as Dillian Whyte risks his World Title ambitions against the big-hitting Alexander Povetkin, live on Sky Sports Box Office. Katie Taylor can cement her status as one of the sport’s finest fighters when she returns to action on another fantastic bill. We’re back with a red-hot line-up of live boxing!”

Britain’s Unified World Champion will be ringside to watch his Heavyweight rival Whyte battle Povetkin this Saturday, live on Sky Sports Box Office, and Irish star Taylor also takes on Persoon in a World Title rematch in the finale of Fight Camp.

Joshua is relishing the opportunity to watch Taylor, a fellow gold medallist at the London 2012 Olympics.

“I really respect her,” Joshua told Sky Sports. “She is phenomenal. She is someone I sit back quietly and learn from.

“She is a real-life athlete – I am more reckless. I take inspiration from her. She is a dedicated athlete.”

The Sky Sports Box Office team of experts also includes Jonas, who came within touching distance of a World Title when she battled to a thrilling draw with Terri Harper in the second week of Fight Camp.

“The girls are leading the way in Fight Camp,” said Jonas. “I’m most looking forward to the Taylor fight and I think Taylor has got a point to prove this time, so she’ll be looking to make a statement.

“Anyone around my weight class, is someone I’ve always got my eye on. You’ve got to look at them from a tactical point of view – and I’ll be looking for weaknesses.”

“I can’t wait to see Whyte-Povetkin and Taylor-Persoon,” said Bellew. “A fantastic night of fights and it’s going to be exciting from start to finish.

“Povetkin doesn’t know any other way than to meet fire with fire. Whyte, he fights anyone, and gets stuck in from the word go. Whyte is a vicious counter puncher and I just expect an explosive fight from the word go.”

Adam Smith, Sky Sports Head of Boxing Development, said: “We’re absolutely delighted that Anthony Joshua is part of our team for this Saturday’s Box Office event as Dillian Whyte risks his World Title ambitions against the dangerous Alexander Povetkin and Katie Taylor takes on Delfine Persoon in an epic rematch.

“AJ knows all about Whyte and Povetkin’s strengths, having already shared the ring with them, while he has followed Taylor’s career with interest since they were both Olympians at London 2012.

“Natasha joins us, just a few weeks after her thrilling draw with Terri Harper, and it could be a scouting mission for the Liverpudlian, who is keen to force her way into Taylor’s future plans.

“Tony Bellew is back on Box Office, this time behind the mic, and he knows all about the excitement surrounding a big Heavyweight clash. It’s a terrific Box Office team that will bring you every opinion and talking point in a thrilling finale to Fight Camp!”