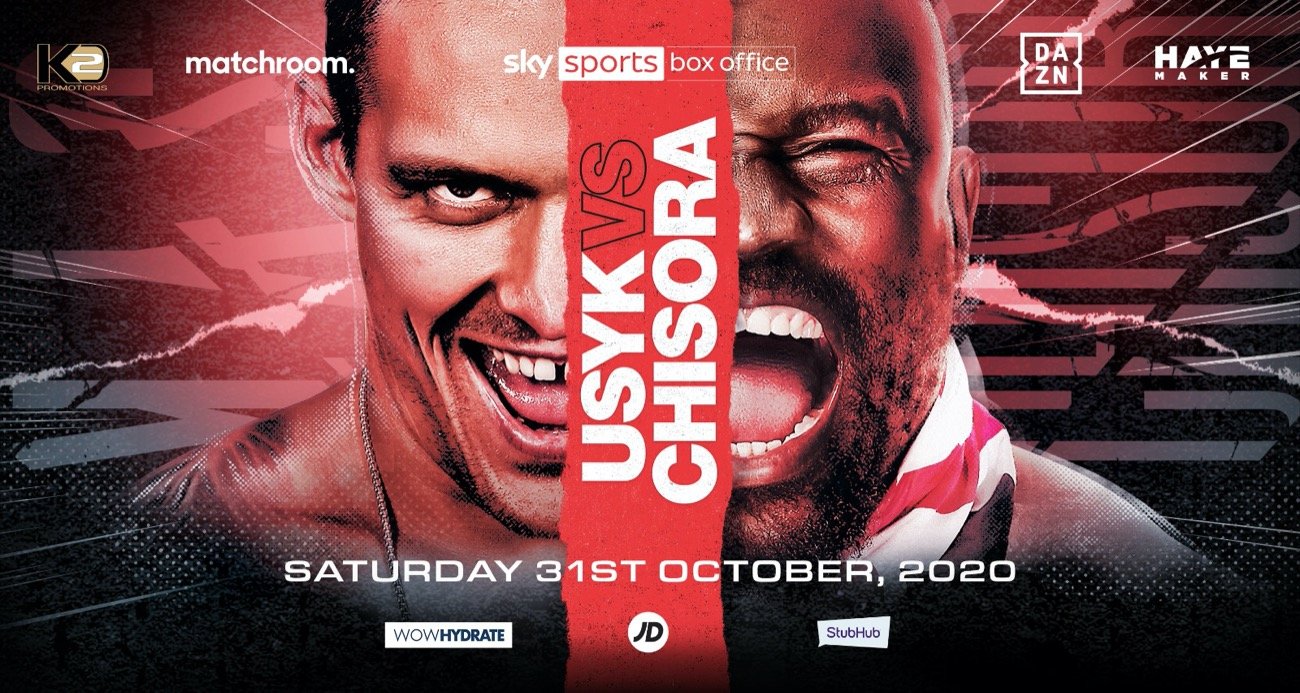 Dana White hailed Russia’s Nurmagomedov as the ‘GOAT’ and pound-for-pound best after he sensationally retired following his second-round stoppage of Justin Gaethje at UFC 254 in Abu Dhabi.

The undefeated Lightweight World Champion is a long-time fan of boxing, and was even spotted ringside for Anthony Joshua’s huge rematch with Andy Ruiz Jr in Saudi Arabia last year, but it is Ukraine’s Usyk he wants to see share the ring with ‘The Gypsy King’, not ‘AJ’.

When asked for his assessment of the sport, prior to Vasiliy Lomachenko’s loss to Teofimo Lopez in Las Vegas, Khabib told reporters: “Right now, I think three guys. Oleksandr Usyk, Vasiliy Lomachenko and Canelo Alvarez.

“Oh sorry, Tyson Fury too. Four guys. It’s very hard [to decide] who is the best.

“I really want to see Usyk vs Fury. It’s gonna be a very good fight. He [Usyk] has very good skill and technique, Tyson Fury too.

“He is not like other Heavyweights, more technique, his footwork is very good, his conditioning is very good, I really wanna watch Usyk against Fury.”

Ukrainian pound-for-pound star Oleksandr Usyk will finally face British favourite Derek Chisora on Saturday October 31, live on Sky Sports Box Office in the UK and DAZN in the US, after their original May 23 date was postponed due to the COVID-19 pandemic.

Usyk (17-0, 13 KOs) made the move to Heavyweight after dominating at Cruiserweight, ending his extraordinary spell at 200lbs as the Undisputed king with a phenomenal run of victories in his opponents’ backyard against Marco Huck, Mairis Briedis, Murat Gassiev and Tony Bellew.

The 2012 Olympic Gold medallist began his assault on the Heavyweight division by retiring Chazz Witherspoon in seven rounds at the Wintrust Arena in Chicago last October and continues his bid to become a two-weight World Champion when he faces an in-form Chisora (32-9, 23 KOs).

Former World Title challenger Chisora scored a devastating second round knockout over Poland’s Artur Szpilka at The O2 in July 2019, a year on from his incredible eighth round KO win against Carlos Takam at the same venue, before blitzing fellow Brit David Price in four rounds in October 2019.

The Finchley powerhouse, who is guided by former two-weight World Champion David Haye, has lofty ambitions of his own and is planning on giving Usyk nightmares in his first real test in boxing’s glamour division as he looks to pull off what would be one of the best wins by a Brit in recent years.

“I have really missed boxing,” said Usyk. “I am working hard in my training camp to show a spectacular performance on October 31. I expect a real test in Derek – he is strong, tough and resilient. He is a really big guy and he hits hard.

“As a Cruiserweight, I reached the highest heights as Undisputed Champion and now I am following the same path as a Heavyweight. I need to test myself against world class Heavyweights on my new road to Undisputed and Derek stands in front of me.

“Many people say that Derek is a monster, but deep down he is a kind man. I don’t expect to see that good side of him. I know that he wants to break me, but I am water, wind and fire all together. Derek Chisora, I am coming for you!”

“Helllllo, Usyk, I’m ready for you, helllllo Usyk!,” said Chisora. “Usyk, I’ve been ready for you all year. It’s my home turf and after such a tough year for everyone, I’m going to give the British public the Halloween party they deserve and finally get revenge for my boy Tony Bellew!”

“Yesterday’s news from the Government was a kick in the nuts, so to bounce back with this fight at this time is so important for boxing,” said promoter Eddie Hearn. “You’ve either got to sit back and say ‘it’s not possible’ or find a way to make it happen, and I’ve got to say a big thanks to Team Usyk, ‘Del Boy’ and David Haye for staying patient and helping get this over the line.

“It’s an absolute firecracker and a fight that’s so important to the Heavyweight division over the next few months. We saw a stunning victory from Povetkin recently to shake up the mandatory situation, can WAR Chisora spring the upset and KO the undefeated Undisputed World Champ? I know he will do everything he can to try and get the victory and this will be another night of Heavyweight drama!”

“Oleksandr Usyk versus Derek Chisora is one of the most anticipated fights in the Heavyweight division,” said Alexander Krassyuk, General Director of K2 Promotions. “The fight was originally scheduled to take place in May, but I can assure boxing fans around the world that it will be worth the wait.

“Usyk is under huge pressure. He has to prove himself as a true Heavyweight, while Chisora has nothing to lose and is always dangerous. It will be a violent and bloody battle. I cannot wait to see them finally collide in the ring on October 31.”

“I see this fight with Usyk as the perfect opportunity for Derek to gate crash the world top 5,” said David Haye of Hayemaker Promotions. “He’s a massive underdog, with very few experts picking him to cause the upset. But I know something they don’t, I know Derek has the size, the chin and more importantly the heart to walk through hell to get this win.

“Derek cancelled his last family Christmas holiday in preparation for this very fight, and as a result has spent the best part of a year improving his boxing IQ, and building a relentless engine, he is ready to step in the ring with Usyk and wage WAR. The world will be shocked at what Halloween havoc Chisora brings to the party.”

“Ukrainian star Usyk has already showcased his sublime skills on these shores in that dramatic battle with Tony Bellew, while Derek Chisora has rejuvenated his career since teaming up with his former foe David Haye.

“A potential fight with Unified Champion Anthony Joshua is already within Usyk’s grasp, but Chisora has big ambitions of his own, and with Haye by his side, could we see the battle-hardened Brit pull off a stunning upset? Usyk against Chisora has all the ingredients for a Heavyweight classic!”

Savannah Marshall and Hannah Rankin will contest the vacant WBO Middleweight World Title on the undercard of Oleksandr Usyk vs. Derek Chisora on Saturday October 31, live on Sky Sports Box Office in the UK and DAZN in the US.

The pair were scheduled to meet on the Lewis Ritson vs. Miguel Vazquez show in Peterborough on Saturday October 17 but Marshall’s trainer Peter Fury returned a positive COVID-19 test, resulting in the fight being postponed in line with the British Boxing Board of Control rules.

“Honestly it has been a dream to have this fight rescheduled so quickly,” said Marshall. “After the past week I’ve just been overjoyed with the news. I couldn’t have asked for a better or bigger platform than on the Usyk vs. Chisora bill.

“It was frustrating that the fight fell through, but it’s one of those things. There was nothing I could have done about it. Peter is okay which is the main thing.

“My training won’t change and will just be like any other training routine 10 days out from a fight. Nothing will change. It hasn’t got more personal for me, as me and Rankin are just two girls that can’t wait for a dust up with each other.”

“It is great that the fight has been rescheduled so soon, thank you to Eddie Hearn and Matchroom for sorting it all out,” said Rankin. “Nothing changes for me. I will be crowned WBO Middleweight World Champion on October 31.”

Adam Smith, Head of Boxing Development at Sky Sports, said: “It’s fantastic news that Savannah Marshall’s World Title fight with Hannah Rankin has been swiftly rescheduled for the Usyk-Chisora bill, which is fast becoming an unmissable night of action.

“Women’s boxing has never been stronger, with Ellie Scotney showcasing her talent last weekend, and now we can look forward to an all-British battle between Marshall and Rankin, with the WBO Middleweight belt at stake. Savannah, a former Sky Scholar, has those polished amateur skills but Rankin has greater professional experience – it’s an enthralling encounter.

“Lee Selby is also targeting another World Title shot on a stacked undercard, which also features Tommy McCarthy’s European Title fight, before Usyk and Chisora take centre stage, in what promises to be a Heavyweight classic!”