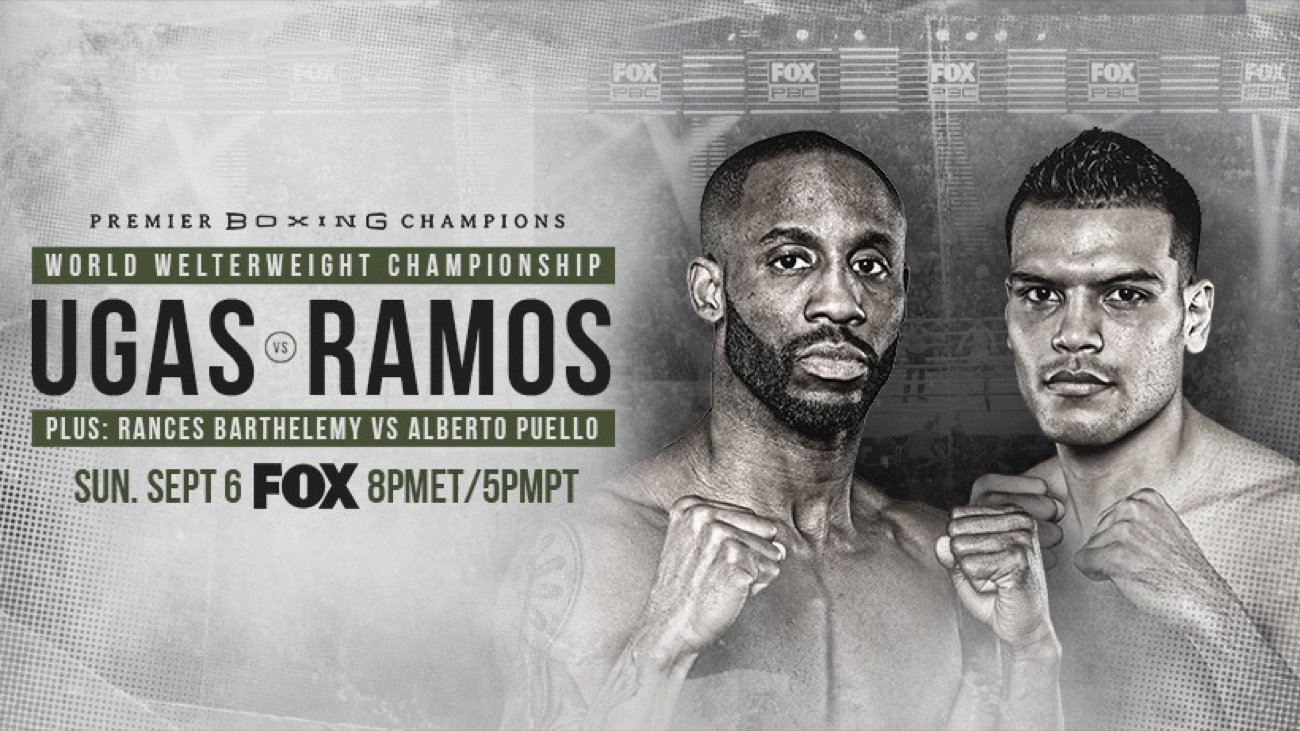 Top contender Yordenis Ugás and hard-hitting Abel Ramos will battle for the vacant WBA Welterweight Championship in the main event of FOX PBC Fight Night and on FOX Deportes this Sunday, September 6, from Microsoft Theater in Los Angeles.

The event will be promoted by TGB Promotions and will take place without fans in attendance at the Microsoft Theater, an AEG venue in downtown Los Angeles.

“Yordenis Ugás has clearly established himself as one of the elite welterweights in the world, and if he can capture the WBA title on Sunday night, he will be in a prime position in the stacked welterweight division,” said Tom Brown, President of TGB Promotions.

“Abel Ramos is coming into this fight off of a last-second knockout victory, proving once again that you can never count him out of a fight until the very end. Add in rising stars Jesús Ramos and Omar Juárez in tough matchups in two undercard fights on FOX, and fans can enjoy a high-octane Sunday night before the Labor Day holiday.”

The 34-year-old Ugás (25-4, 12 KOs) has established himself as an elite welterweight since returning from a layoff in 2016. Ugás, who is from Santiago, Cuba, and now lives in Miami, Florida, was on an eight-fight win streak before losing a narrow split-decision to Shawn Porter in a world title fight on FOX last March.

The Olympic bronze medalist beat then-undefeated fighters Jamal James and Bryant Perrella, plus veteran contenders, including Thomas Dulorme and Ray Robinson, on his winning streak heading into the Porter fight.

“I’ve done everything mentally and physically in the gym to put me in the best position to win this fight,” said Ugás. “This is not going to be easy because I know Ramos is coming with all his might.

We are fighting on FOX, the biggest stage in boxing, and I promise to bring an exciting fight for the fans. This is my time to shine and win my first world title.”

Fighting out of Casa Grande, Arizona, Ramos (26-3-2, 20 KOs) enters this fight off of a career-best victory in February on FOX when he stopped Bryant Perrella in the last moments of the final round to score an unlikely victory while trailing on the cards.

The 29-year-old enters this bout on an eight-fight winning streak, including 2019 victories over Francisco Santana and Jimmy Williams. Ramos previously campaigned at 140 pounds, where he fought former champion Maurice Hooker to a draw while dropping contests to former champions Regis Prograis and Ivan Baranchyk.

“I’m very excited for this fight,” said Ramos. “I trained extremely hard and prepared myself for a tough fight. I know that Ugás always comes to fight, and the fact that there’s a title on the line makes this fight even better. It’s every fighter’s dream to become a world champion. I’m prepared for war. Boxing fans can expect fireworks on Sunday.”

The nephew of main event participant Abel Ramos, the 19-year-old Jesús Ramos (12-0, 11 KOs), made his U.S. debut in April 2019 with a knockout of Selfullah Wise. Fighting out of Casa Grande, Arizona, Ramos’ next fight would see him go to the scorecards for the first time in a triumph over Kevin Shacks.

His competition increased after that, as he delivered stoppage victories over Rickey Edwards and Ramal Amanov to close out his 2019 campaign.

“I’m really prepared for this fight, especially after a nine-week training camp,” said Ramos. “We worked extremely hard to come in 100% for this fight. We’re going up against a tough, undefeated opponent that’s coming to win and take everything that I’ve worked for.

That just motivates me to give the best of me, so that I can prove why I’m a top prospect in the sport. I expect the best Esteban Garcia on September 6, and I think our fight can be the fight of the night.”

Fighting out of Brawley, California, García (14-0, 6 KOs) will make his U.S. debut on September 6, after a 2019 run that saw him pick up four victories, including his first two eight-round decisions in triumphs over Emanuel Robles in March and most recently Juan Ramon Guzman in November.

The 30-year-old first turned pro in April 2016 with a stoppage victory over Eduardo Melendrez.

“I’m extremely appreciative of the opportunity to enter the ring once again to fight this weekend,” said García. “I know my fans and people who love boxing have been waiting patiently during this pandemic for the return of the sport. I look forward to giving them a great show on Sunday night.”

Juárez (8-0, 4 KOs) carries the nickname “Relámpago”, or “Lightning” in English, and it could apply to how quickly he strikes in the ring, and his plans to ascend into the contender ranks rapidly.

The 21-year-old from Brownsville, Texas, had an outstanding amateur career with over 120 fights, establishing himself as a “can’t miss” pro. He had a busy 2019, chalking up five straight wins before beating Angel Martinez in February and Willie Shaw in August on FOX.

“I’m truly grateful to be fighting once again on FOX, especially so soon after my last fight,” said Juárez. “My goal will always be to give the fans a crowd-pleasing night of action.

I know I have a target on my back being that I’m undefeated, so you better believe I’m training hard in-between fights. I’m feeling good and super excited to be showcasing my skills to all the fans watching around the world.”

The 25-year-old Linger (12-3-2, 8 KOs) enters this contest after most recently stopping Darel Harris in January. Fighting out of his native, Buckhannon, West Virginia, Linger has fought professionally since 2015, winning his first 12 fights until a 2018 defeat to unbeaten Danielito Zorrilla.

His only other two defeats have come by narrow majority decisions in 2019 duels against Maurice Lee and Nelson Hampton.

“This is a great opportunity for me to show my skills on a big stage against a quality opponent,” said Linger. “We’ve put all the hard work into this training camp, and I’m ready to get in there and rumble on fight night.”

Cody Crowley Squares Off Against Josh Torres in Welterweight Showdown

Unbeaten Cody Crowley will take on Josh Torres in a 10-round welterweight clash headlining FS1 PBC Fight Night and on FOX Deportes this Sunday, September 6 from Microsoft Theater in Los Angeles.

Representing his native Ontario, Canada, Crowley (18-0, 9 KOs) comes in after a 2019 that saw him win a Canadian super welterweight title with a 12-round decision over Stuart McLellan in February, before successfully defending that title with a dominant decision over Mian Hussain in October. The 27-year-old returns to fight in the U.S. for the first time since 2016, after seven of his first eight pro fights came in the U.S.

The 30-year-old Torres (22-6-2, 13 KOs) enters this matchup the winner of his last seven bouts, with six of those wins coming inside of the distance. A native of Albuquerque, New Mexico, Torres scored three victories in 2019 and has faced veteran contenders including Mike Alvarado and Dusty Hernandez-Harrison throughout a career dating back to 2008.

Born in Uzbekistan and residing in Russia, Akhmedov (7-1, 6 KOs) represented Turkey at the 2016 Olympics. The 29-year-old returns to action after a grueling title fight against Mario Barrios on the Spence vs. Porter PPV undercard that he lost by a narrow decision. He made his U.S. debut in April 2018, immediately announcing himself with stoppage victories over Ismael Barroso and Oscar Barajas.

Now training in North Hollywood, California, Perez (24-11, 8 KOs) hails from Sindangan, Zamboanga del Norte, Philippines and most recently lost a decision to George Kambosos Jr. in January 2019. The 29-year-old has faced a slew of contenders, with two victories over Christian Gonzalez and a knockout of Roberto Marroquin, in addition to stateside challenges of Lamont Roach, Jessie Magdaleno and Chris Avalos.