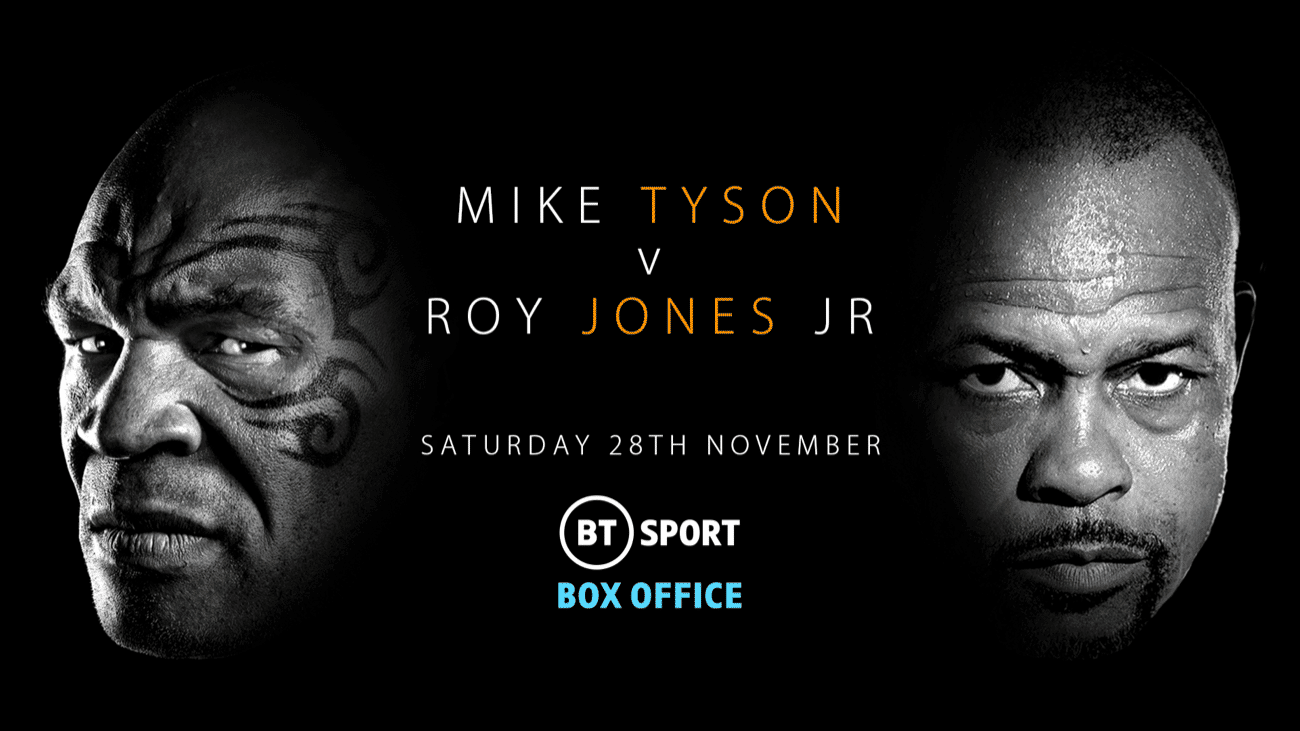 FITE, the premiere global platform for sports and entertainment, announced today that it has acquired the exclusive US and Canadian digital rights to carry the highly anticipated Tyson vs. Jones Pay Per View event on November 28th at 9pm ET. As part of the deal, FITE’s battle-tested PPV platform is powering TysonOnTriller.com, the central hub for the event. Fans can buy the digital event via FITE.tv, any of the FITE mobile/OTT/Smart TV platforms, or directly from the TysonOnTriller.com website which will feature fight news, announcements, promotional videos and coming soon, a digital portal to buy the event.

This important boxing and pop cultural event, featuring “Iron” Mike Tyson vs. Roy Jones Jr. is brought to you by Triller, the wildly popular digital app. The entire 4-hour event, which will kick off at 8pm ET with the live PPV Main card starting at 9pm ET, will also feature an exciting undercard of compelling fights in addition to Tyson and Jones Jr.: Badou Jack vs. Blake McKernan, Viddal Riley vs. Rashad Coulter, and YouTuber Jake Paul vs. Nate Robinson. The host will be Emmy-winner Mario Lopez. Details about the live countdown show and the special musical artists to be added to this multimedia event will be announced soon.

The fight is the first event of a series of live sporting events produced under Mike Tyson’s Legends Only League, a next-generation sports venture that provides full support and infrastructure to the world’s greatest athletes.

“The Tyson vs. Jones fight is going to be one of those iconic brawls people will be talking about for decades,” said Michael Weber, COO of FITE. “Triller and FITE are the perfect pair to deliver a flawless, no-filler fan experience worthy of this moment.”

“Triller has always been about shaking things up and pursuing our motto, ‘You do you,’” said Triller Chairman Bobby Sarnevesht. “No one embodies that motto more than Mike Tyson. We’re thrilled to be working with Tyson and Legends Only League, Jones Jr., this amazing group of athletes, and FITE to present this historic event.”

FITE, an international company headquartered in New York, has streamed more than 3,500 events in the last 5 years including major PPV events from Top Rank, PBC, AEW, UFC, WWE, Impact, GoldenBoy/HBO and Matchroom Boxing. This company, which specializes in global digital PPV live streams will make this event available via all major OTT devices: Roku, Amazon Fire, Apple TV, Android TV, XBOX, Chromecast, PlayStation, online at FITE.tv, all iOS and Android mobile apps, Vizio SmartCast TVs and more than 7,000 Smart TV models, as well as via TysonOnTriller.com. Plus, the PPV fight purchase made via any of these FITE platforms will work on the others as well, and include replays.

The exhibition match, presented by Triller, will take place in LA with YouTuber Jake Paul and former NBA star Nate Robinson, Badou Jack and Blake McKernon, Viddal Riley and Rashad Coulter who will fight in the build-up to Tyson v Jones Jr.

Tyson is considered to be one of the greatest heavyweights of all time, having won his first nineteen professional bouts by knockout, and becoming the first heavyweight to unify the WBA, WBC and IBF titles in 1987. His opponent, Roy Jones Jr., made history himself in 2003, when he won the WBA heavyweight belt, becoming the first former middleweight champion to do so in 106 years.

BT Sport will live stream the Mike Tyson v Roy Jones Jr. press conference on Thursday 29th October at 6pm on the BT Sport YouTube channel. The press conference will give media the opportunity to interview both the former heavyweight world champions on their upcoming fight with Jake Paul and Nate Robinson also scheduled to appear.

The fight is the first event of a series of live sporting events produced under Mike Tyson’s Legends Only League, a next-generation sports venture that provides full support and infrastructure to the world’s greatest athletes.

Saturday 28th November will be an action-packed night of for boxing fans, kicking off with a BT Sport Fight Night headlined by Daniel Dubois v Joe Joyce available for BT Sport subscribers, followed by the highly anticipated return of Mike Tyson and Roy Jones Jr on BT Sport Box Office.