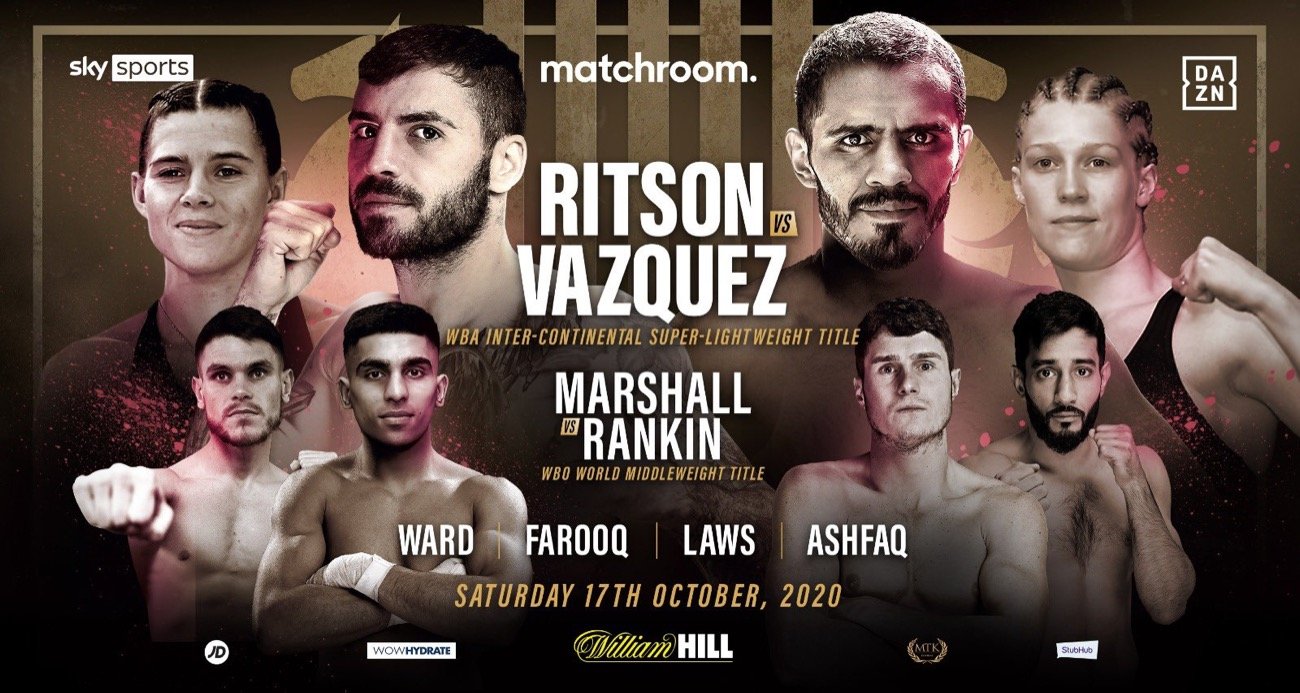 Ritson (20-1, 12 KOs) was originally slated to face Vazquez (42-9, 16 KOs) on April 4 in Newcastle before the COVID-19 pandemic turned the sporting world on its head and the event was postponed until a later date.

The Geordie favourite produced a career-best performance to beat bitter rival Robbie Davies Jr in an enthralling Fight of the Year candidate last time out in October to stay in line for a shot at the WBA Super-Lightweight crown.

Vazquez previously held the IBF Lightweight World Title for four years, making six defences of the title in that time, before losing to Mickey Bey via a controversial split decision in Las Vegas, and will provide a tough test for 26-year-old Ritson.

“I’ve had no time off,” said Ritson. “I’ve been in the gym the full year training hard, staying ready and waiting for a date to be confirmed. Nothing has really changed and now it’s full steam ahead for October 17.

“If I bring my A game then I’ll be very hard to beat and that’s what I’m planning on doing. We know what Miguel Vazquez is all about, he’s going to be a real test for me. I’ve had top level sparring with the likes of Josh Taylor that has kept me fresh.

“Once I get the win on October 17 I’m going to have a week off and then get straight back in the gym. I want to fight again by the end of the year, hopefully Eddie can keep the big fights coming. I want to keep pushing towards that WBA World Title, that’s the main goal for me.”

“I’m so happy that I have a fight date set in stone,” said Marshall. “It’s been a while, but I’m excited to be back in the ring. Hannah Rankin is a former IBO World Champion, so I’m expecting a tough hard fight against her but it’s one that I’m really looking forward to it.

“It’s been a long road for me, so it would be incredible to become World Champion. It’s crazy to think I was meant to be fighting for a World Title in April at Light-Heavyweight and this is now at Middleweight, but that’s female boxing and you have to take these opportunities when they come.”

“This fight has been in the back of my mind since it was first talked about in February,” said Rankin. “I have proven time and time again I’m willing to fight anyone, anywhere, anytime and that’s the foundation my career has been built on.

“For this fight I’ll be stepping up to Middleweight and I’m relishing the chance to become a two-time two-weight World Champion having already held the IBO Super-Welterweight Title.

“With regards to Savannah, I’m excited for my chance to end the hype; as a professional she’s yet to be tested. On October 17 I will be crowned WBO World Middleweight Champion and I’ll be bringing that title back to Scotland. Scotland vs. England is always a fun clash in any sport!”

The ‘Sandman’ vows to put Vazquez to sleep

Lewis Ritson believes the extra few months graft in the gym locked away with trainer Neil Fannon will pay dividends in the long run.

The Geordie puncher has felt the knock-on effects from the pandemic, which ruled out his planned fight with Miguel Vazquez twice, back in April and then again June, but he insists the extra preparation has taken his game to the next level.

“It has probably benefitted me more than most other fighters,” said Ritson. “It has really allowed for us to gel and work on other areas of our game. Rather than wondering when a fight date may drop, despite the cancellations we have always had an end date in mind which has allowed for me to stay disciplined and sharp throughout.

“I’ve been in the gym the full year training hard and staying ready for whatever happens next. The start of lockdown gave me a chance to slow the pace down a little bit and work on a lot more of the technical stuff. I feel like I’ve improved a couple of levels compared to how I boxed against Robbie Davies Jr. We knew that we would get a new date confirmed eventually, we just had to stay in the gym.”

Currently ranked number two with the WBA, Ritson finds himself on the cusp of a shot at World honours and believes this Saturday’s Super-Lightweight showdown against former long-standing IBF ruler Vazquez, shown live on Sky Sports and DAZN, is the perfect bridge to the next level.

“If I bring my A game, I’ll be too much for Miguel and will stop him. I think he’s probably a little bit on the slide whereas I’m still on the way up, so we’re meeting bang in the middle. This is the exact type of fight where I can gain more experience to move to the next step. He’s been there and done it. We know what he is all about and what he will bring.

“Beating Robbie proved I’m at that European level, now it’s time to prove I can go to the interim world level stage with a good win against Vazquez. That will pave the way for more big fights. We never take anyone lightly and we definitely haven’t taken Vazquez lightly. If I bring my A game, I’ll have more than enough to beat him.”