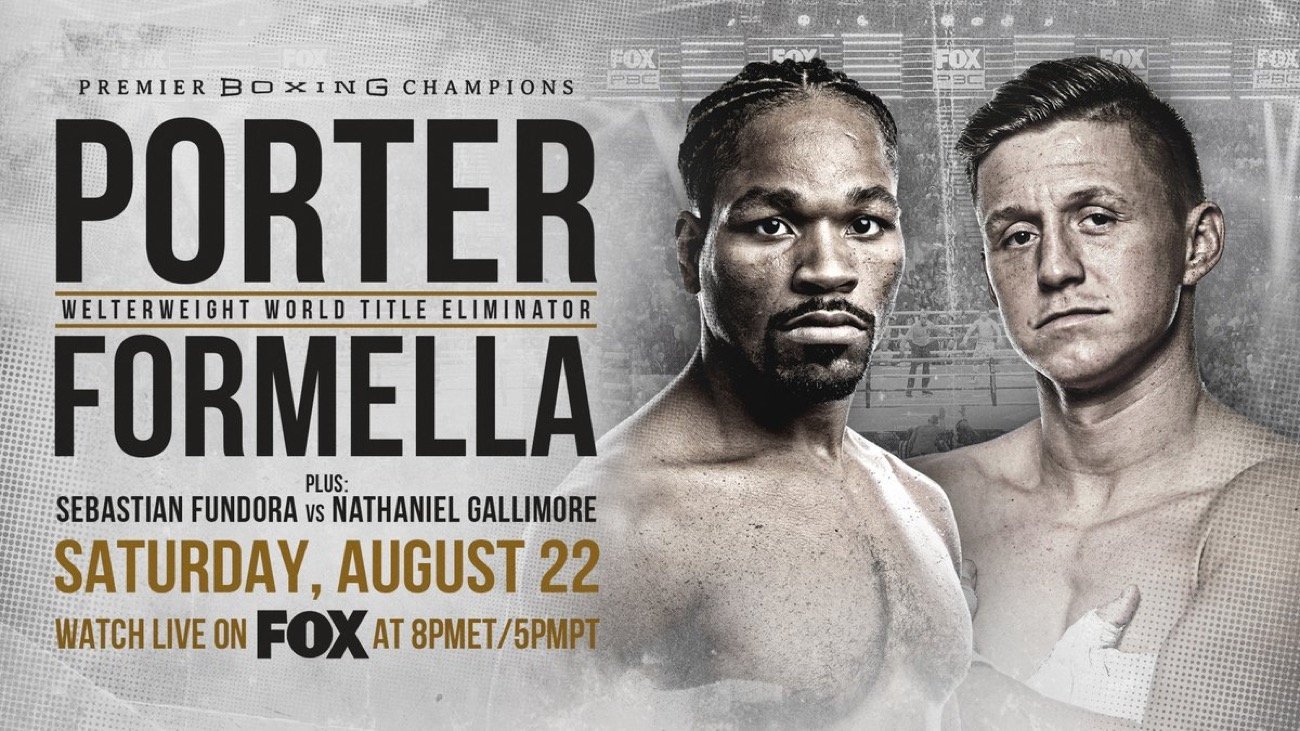 “With championship-winning performances and numerous ‘Fight of the Year’ battles, Shawn Porter has made himself into one of the top welterweights of this generation and he will bring his fan friendly style to the ring yet again as he seeks a path to a third world title,” said Tom Brown, President of TGB Promotions. “Standing in his way is a hungry undefeated fighter in Sebastian Formella, who no doubt is coming from Germany intent on pulling off the upset August 22. In addition, rising super welterweight Sebastián Fundora will face perhaps his toughest test to date in Nathaniel Gallimore, and top prospect Joey Spencer again will look to show the promise that makes him a potential rising star in the sport.”

The Porter vs. Formella event will be promoted by TGB Promotions and Shawn Porter Promotions and will take place without fans in attendance at the Microsoft Theater, an AEG venue, in downtown Los Angeles.

Born in and Akron, Ohio and now living and fighting out of Las Vegas, Porter (30-3-1, 17 KOs) returns to the ring after narrowly losing a welterweight unification showdown against Errol Spence, Jr. last September, in one of 2019’s best fights. The 32-year-old has faced a slew of big names throughout his two runs as champion in the stacked 147-pound division. Porter’s first title was won in 2013 by defeating Devon Alexander, while his second championship came in a 2018 triumph over Danny Garcia. Along the way he was beaten top fighters such as Adrien Broner, Yordenis Ugas and Andre Berto, while coming up just short in memorable showdowns against Keith Thurman and Kell Brook.

“Me and my dad have been working hard since April staying ready for this opportunity to get back in the ring,” said Porter. “Over the past couple of years, any time I step in the ring there are some new wrinkles to my game. We understand that you can’t fight one way against everyone, so you’re going to see some small, slight wrinkles, but I’ll always been an aggressive fighter. Once I smell that blood, I’m going for it. We’re excited to show off a different side of Shawn Porter.”

The 33-year-old Formella (22-0, 10 KOs) turned pro in 2014 at the age of 26, racking up seven wins in the year before fighting and winning his first 10 round fight in 2015. He continued to rise up the rankings fighting in his native Hamburg, Germany, before capturing a regional title in 2018 by stopping Angelo Frank. He continues to ride his winning streak into his U.S. debut on August 22, having won three-straight 12 round decisions over Betuel Ushona, Thulani Mbenge and most recently Roberto Arriaza in January of this year.

“I have always said that I wanted to compete against the best, and now I have that chance on Saturday, August 22,” said Formella. “Even though the experts may think I’m the underdog, I have trained hard for this fight and will give everything I have in the ring. Shawn Porter is rightly a superstar in this weight class and I’m excited to get in the ring and test myself against him.”

Towering at nearly six-feet six-inches, Fundora (14-0-1, 9 KOs) has used his height and length, combined with power and aggressiveness, to rack up an unbeaten record since turning pro in 2016. The 22-year-old most recently defeated previously unbeaten Daniel Lewis in his 2020 debut on February 22. Fighting out of Coachella, California, Fundora entered the ring three times in 2019, including TKO victories over then unbeaten fighters Donnie Marshall and Hector Manuel Zepeda, before an exciting split-draw against fellow contender Jamontay Clark.

“You have to be at your very best when there’s adversity, like this pandemic, and I will be the best version of myself when I face Gallimore,” said Fundora. “You’ve only got three choices in life: give up, give in, or give it all you’ve got. I always rise up to the toughest challenges that are put in front of me and I plan on doing it again on August 22.”

“I’m back working with my old trainer George Hernandez and I’m excited for everyone to see a new and improved fighter,” said Gallimore. “I have to go in there and prove myself. Fundora is a good fighter, but he’s never experienced the caliber of competition that I’ve fought. There are levels to this. I’m planning to to dominate each round. I just want everyone to tune in and catch the action because it’s going to be a fight to remember.”

The 20-year-old Spencer (10-0, 7 KOs) has made fast strides since turning pro in February 2017. The Linden, Michigan native kicked off 2020 in January with a six-round decision victory over Erik Spring on FOX. That win built on an impressive four-win 2019 that he punctuated by stopping previously unbeaten Travis Gambardella in September. He will be opposed by the 31-year-old West (5-1, 3 KOs), who fights out of Davenport, Iowa and enters this fight the winner of his last two contests.

“This was the best training camp I ever had,” said Spencer. “I feel better than ever coming into fight week. I know I have a pretty tough opponent with a good record, so I want to come out and show how much I’ve grown during this time away from the ring.”

“I’m blessed to be back and do what I love,” said West. “Joey is a popular fighter who’s been molded and shaped for big situations and shows like this. I’m extremely excited to pick his brain and talk combat in the with him on Saturday night.”

LOS ANGELES (August 19, 2020) – German contender Sebastian Formella relishes the opportunity he has in front of him in his U.S. debut as he prepares to face two-time welterweight champion “Showtime” Shawn Porter in a welterweight title eliminator headlining FOX PBC Fight Night and on FOX Deportes this Saturday, August 22 from Microsoft Theater in Los Angeles.

“I have always said that I want to compete with the best,” said Formella. “Now I have the chance. Even though I’m coming from Germany and the U.S. fans aren’t as familiar with me, I’m ready to do whatever it takes to win. I can’t wait to test myself against a welterweight superstar like Shawn Porter.”

For the 33-year-old Formella, challenges are nothing new. He debuted as a pro in 2014, already 26 years old, but quickly showed his mettle, winning a German middleweight title in just his sixth pro fight. After moving down into the welterweight division full time in 2018, he has reeled off five straight wins against opponents with a combined record of 95-8-1.

“Everyone who knows me, knows that I will face any opponent,” said Formella. “When my promoter called and offered me the fight, I immediately said yes – without knowing the details. I know what I can do and I’m willing to prove it against whoever is available. I am not a guy who gives up or avoids anything.”

Heading into this fight, Formella has been on a training camp world tour, participating in training camp in his native Germany, before two weeks of sparring in Istanbul. Eventually he arrived in the U.S., where he sparred with top welterweight Yordenis Ugas, who faced Porter in dropping a close title fight last March on FOX.

“One of the reasons this opportunity came at the right time is because I had been in training in Germany since June,” said Formella. “Since then, we had two weeks of sparring in Istanbul. We had rough conditions there and that made it all the better for training so I feel prepared for whatever is going to happen in the ring.

“One of the sparring partners in Istanbul was my promotional stablemate Volkan Gökcek. It was optimal work day in and day out. Once we got to the U.S., I sparred with Yordenis Ugas in Las Vegas and I know that experience can only help me on fight night.”

Formella will have a tall task on fight night against the two-time 147-pound titlist Porter, who’s career resume is littered with big name opponents such as Errol Spence, Jr., Keith Thurman and Danny Garcia, amongst many others. Porter is defined by his rough and tumble, all-action style that ensures nobody is in for any easy night against him.

“Porter makes a lot of pressure, he can bridge the distance very well with his fast movements and he is very strong on the inside,” said Formella. “You always have to be careful and concentrated. You must not let him drag you into his fighting style. We’ve analyzed Porter, and we know it’s going to be tough. But it’s boxing and the nice thing about our sport is that a lot of things can happen that you don’t expect. We have a tactic set up and I’m going to throw everything at him to get the win.”

In his corner, his promoter Erol Ceylan has drawn a direct line between Formella’s underdog status against Porter and Formella’s similar status when he triumphed over Thulani Mbenge, who had come into that fight off of victories over Miguel Vazquez and Diego Chaves.

Unbeaten super welterweight sensation Sebastian “The Towering Inferno” Fundora claims no ill-effects from the COVID-19 pandemic on his normal training camp as he prepares to take on Nathaniel Gallimore in the co-main event of FOX PBC Fight Night and on FOX Deportes this Saturday, August 22 from Microsoft Theater in Los Angeles.

“Every camp we essentially quarantine ourselves, so this isn’t much different,” said Fundora. “This training camp is very similar to any other. We do a lot of running, training, eating and sleeping. We just stick to things that we don’t really need to go out for.”

Fundora returns to the ring after keeping his unbeaten record intact in February by defeating then undefeated Daniel Lewis on the PPV undercard of the Wilder vs. Fury rematch. As is his usual routine, Fundora returned to the gym almost immediately after.

“It’s always been business for me,” said Fundora. “So I really haven’t taken any time off. I’ve been working out ever since my last fight in February. I’m just approaching this like a professional and planning to take full advantage of another opportunity that I’m given.”

Towering at nearly six-feet six-inches, Fundora has at times used his considerable reach and height to his advantage, while at other times he has chosen to fight on the inside and turn fights into phone booth brawls. For the talented 22-year-old, he’ll measure out his opponent in Gallimore and take the strategy from there.

“The way I fight depends on the specific fight and who’s in front of me,” said Fundora. “I like to use different tools for different fighters. I don’t know too much about Gallimore. I haven’t watched very much of him before, so I’m just going to take it moment by moment and make the proper adjustments along the way.”

In Gallimore, Fundora will be tested by an opponent who has proven to be a tough contender on the elite level, having faced the likes of Julian Williams and Erickson Lubin, while also owning a victory over unified 154-pound champion Jeison Rosario. Although this will be just his 16th pro fight, Fundora plans to be prepared when his world title opportunity arrives. His promoter Sampson Lewkowicz, for one, sees this matchup as another step toward becoming the “king” of 154-pounds.

“Sebastian Fundora is a giant in the division and soon he will also be a king,” said Lewkowicz. “He will be in fantastic shape on Saturday and ready for another towering performance against Gallimore.”

“As soon as my team tells me it’s time, we’ll be ready,” said Fundora. “As a fighter, I’m always ready. We’re looking to make a statement with every fight and put on a great performance for the fans. This Saturday night will be no different.”