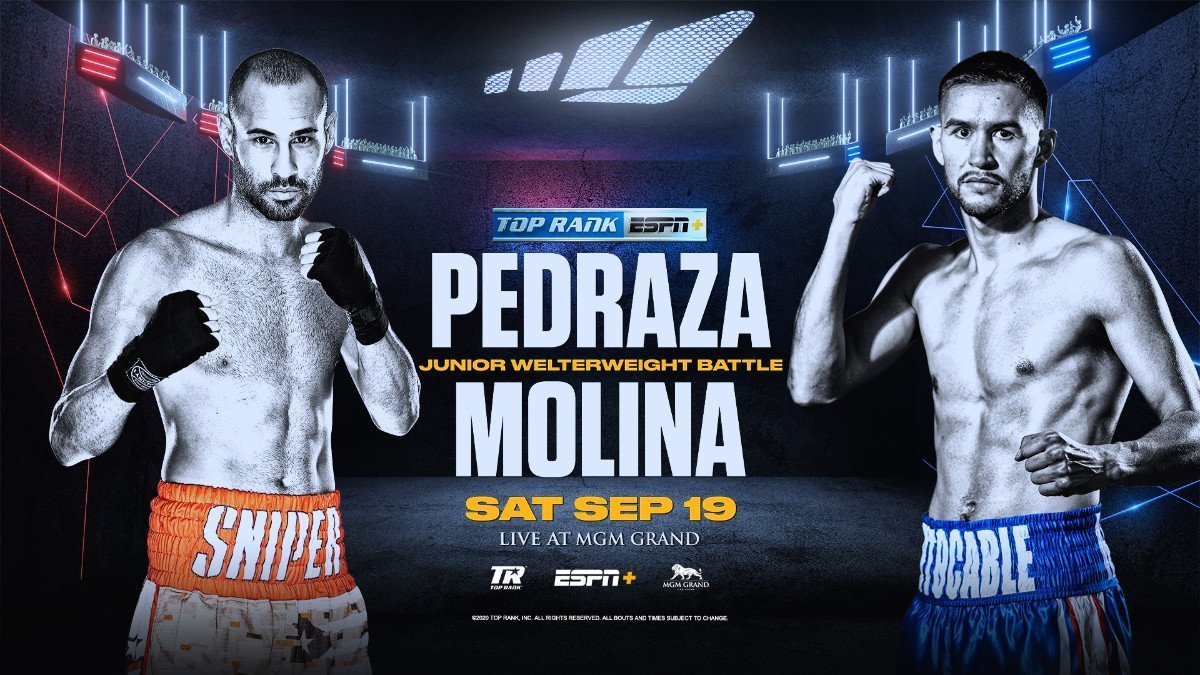 Pedraza-Molina will headline a night of fights live on ESPN+ beginning at 7:30 p.m. ET, with the co-feature set to begin at approximately 10 p.m. ET.

“Pedraza and Molina asked us for a meaningful fight, and we believe the winner is in excellent position for a world title opportunity,” said Top Rank chairman Bob Arum.

Pedraza (27-3, 13 KOs), a former junior lightweight and lightweight world champion, returns to the MGM Grand “Bubble” a little more than two months after he dominated former world title challenger Mikkel LesPierre over 10 rounds. Pedraza had an inauspicious junior welterweight debut when he lost a decision to Jose Zepeda last September, but the LesPierre performance established his place among the division’s top contenders. Molina (22-2, 9 KOs) is 4-0 since signing with Top Rank in early 2019, reviving a career that stalled following a pair of decision defeats. Last November, he knocked out the normally durable Hiroki Okada in 65 seconds. He followed up the Okada KO with an upset victory over Amir Imam in February on the Deontay Wilder-Tyson Fury II undercard.

Pedraza and Molina were scheduled to fight on the Jose Ramirez-Viktor Postol undercard on May 9, but the event was scrapped due to COVID-19. The Ramirez-Postol bout finally happened August 29, and now Pedraza and Molina will headline a show of their own.

Pedraza said, “I’ve been looking for a fight against Javier Molina for a long time. I also had him on my radar because we were supposed to fight earlier this year, but the whole situation with the pandemic changed those plans and the fight was postponed. I kept training hard to keep improving and I ended up fighting against another opponent and had a great performance.

“This fight will bring me even closer to a world title opportunity. My goal is to become a three-division world champion, and Javier Molina will not stop me from achieving my dream.”

Molina said, “Going into this year, I had big expectations for myself. I know what I’m capable of, and I’m here to make a statement against Pedraza. I haven’t received the respect or recognition I feel I deserve but getting a win over Pedraza will put my name out there. It’s a huge opportunity, and I plan on taking advantage of it.”

Heavyweight knockout artist Efe Ajagba will make his Top Rank on ESPN debut Saturday, Sept. 19 against veteran Jonnie Rice in a 10-rounder as the co-feature to the Jose Pedraza-Javier Molina junior welterweight main event from the MGM Grand Las Vegas.

The undercard bouts will stream live on ESPN+ beginning at 7:30 p.m. ET, with the co-feature scheduled to begin at approximately 10 p.m. ET.

“I am delighted that Efe Ajagba will make his Top Rank debut as he continues his march to the top of the heavyweight division,” said Top Rank chairman Bob Arum. “Kasir Goldston and Jahi Tucker are two major talents, and we are excited to see their professional journeys begin here in Las Vegas.”

Ajagba (13-0, 11 KOs) resumes his heavyweight world title quest with a new promoter, manager (James Prince) and head trainer (Kay Koroma). Now living in Houston, Ajagba last fought in March, knocking out former world title challenger Razvan Cojanu in nine rounds. At 6’6 and 240-plus pounds, the 26-year-old former Nigerian Olympian is one of the division’s youngest contenders. Rice (13-5-1, 9 KOs) measures 6’5 and often tips the scales at more than 260 pounds. He is known for his durability, as his only two knockout defeats have come against previously unbeaten foes in the seventh and 10th rounds, respectively.

“To all my fans, the wait is finally over. I am ready to get back in the ring and do what I do best,” Ajagba said. “I haven’t fought since March 7, and I’ve been looking for someone to devour. On September 19, I finally get to do it. Tune in to ESPN+. You don’t want to miss it.”

Goldston, from Albany, N.Y., won three consecutive National Junior Olympic titles from 2015-2017 and back-to-back Junior Open Championships in 2017 and 2018. Last year, at the prestigious Bornemissza Tournament in Eger, Hungary, he took home a silver medal after a split decision loss to a Hungarian boxer.

Tucker, from Deer Park, N.Y., was ranked first in the nation at 138 pounds after winning the 2018 USA National Boxing Championship in Salt Lake City, Utah. A high school sophomore at the time, Tucker aimed to qualify for the 2024 Summer Olympics. He picked up his first international gold medal last June at the Bornemissza Tournament and elected to turn pro rather than wait for the Olympics.

In other undercard contests:

Undefeated junior middleweight prospect Leo Ruiz (7-0, 5 KOs), winner of four straight by knockout in three rounds or less, will fight an opponent to be named in a six-rounder.

Bryan Lua (5-0, 2 KOs), from California’s Central Valley, will fight for the first time in more than two years against an opponent to be named in a six-rounder at lightweight.

Puerto Rican junior lightweight prospect Frevian Gonzalez (3-0, 1 KO), who won a decision inside the “Bubble” on June 18, returns to fight Carlos Marrero (2-3-1) in a four-rounder.