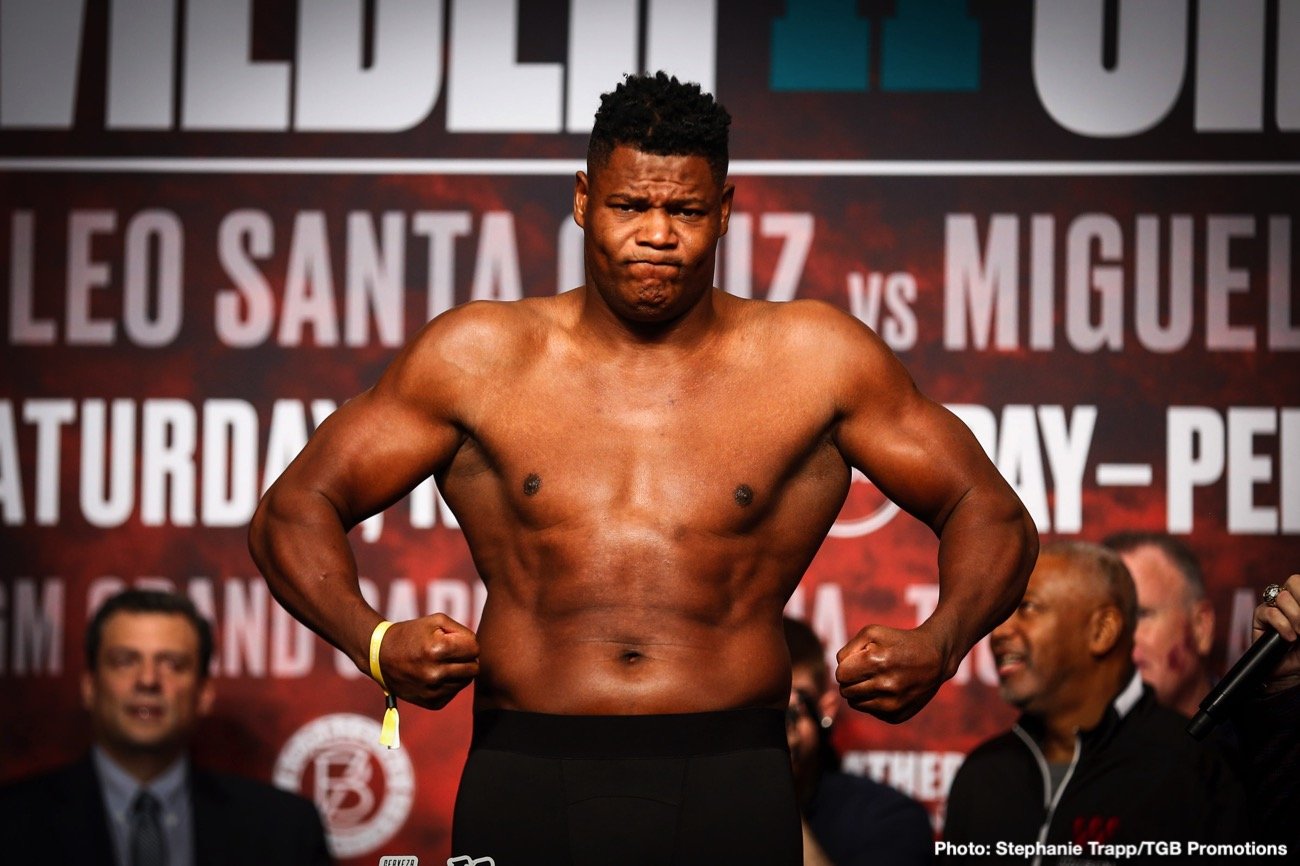 Telecast Beginning at 8 p.m. ET/5 p.m. PT – Top heavyweight contender Luis “King Kong” Ortiz will headline a stacked night of heavyweight action when he takes on Alexander “The Great” Flores in the 10-round main event of FOX PBC Fight Night and on FOX Deportes Saturday, November 7 from Microsoft Theater in Los Angeles.

“Sports fans love the power and drama of the heavyweight division and this lineup on November 7 will provide both in droves,” said Tom Brown, President of TGB Promotions. “‘King Kong’ Ortiz has long established himself as an upper echelon heavyweight, and he will look to work his way back to another title shot against the hungry and game Alexander Flores. With unbeaten heavyweights Frank Sánchez and Michael Coffie in separate bouts on the undercard, this show is built for action from start to finish.”

With exceptional power and sublime technical skills, Ortiz (31-2, 26 KOs) has been a fixture atop heavyweight rankings for years, with his only defeats coming in memorable contests against former longtime heavyweight champion Deontay Wilder. Born in Camaguey, Cuba and trained by longtime coach Herman Caicedo in Miami, Ortiz won three bouts between Wilder contests, defeating Travis Kauffman, Christian Hammer and Razvan Cojanu. Prior to that run, Ortiz picked up victories over the likes of Bryant Jennings, Tony Thompson and Malik Scott to build up his heavyweight resume.

“I can’t wait to get back in the ring and put on a great performance for all my fans,” said Ortiz. “I’ve been training hard and I’m going to show why I’m still one of the most dangerous and avoided heavyweights around. Credit to Flores for stepping up to the challenge, but I’m planning on making a statement November 7 on FOX.”

The 30-year-old Flores (18-2-1, 16 KOs) will return to action after his last outing saw him stop Mario Heredia in the sixth-round of their November 2019 affair. Fighting out of his native Rowland Heights, California, Flores has fought professionally since 2010, and has scored knockouts in his last 14 victories. The only blemishes on Flores’ record have come against former heavyweight champions Charles Martin and Joseph Parker.

“When I got the call for this fight, I immediately said yes and I was ready to go,” said Flores. “I’m always in shape throughout the year, so now we’re just sharpening the tools for November 7. Ortiz is coming off of a big fight, and I’m preparing for the best Ortiz we’ve ever seen. I don’t know if he’s overlooking me, I just know that I’m going to be ready to take advantage of a life changing opportunity.”

An amateur standout from his native Cuba, Sánchez (15-0, 11 KOs) now trains in San Diego with coach Eddy Reynoso. The 28-year-old added four victories to his ledger in 2019, including a stoppage of Puerto Rican Olympian Victor Bisbal. His 2020 debut saw Sánchez dominate tough contender Joey Dawejko in March on FOX on his way to a unanimous decision victory.

“I look forward to my return so that I can again showcase my skills and make the case that I am a future heavyweight champion,” said Sánchez. “Brian Howard is a very dangerous opponent, but I am even more dangerous. My trainer Eddy Reynoso is preparing me for a spectacular win. I’m a proud Cuban fighting in America in front of millions of people on FOX. It is a dream come true, but only half of the dream. The job will be complete once I become the heavyweight champion of the world.”

Howard (15-3, 12 KOs) made his heavyweight debut in style in August, scoring an impressive first-round knockout over Puerto Rican Olympian Carlos Negron. Fighting out of Atlanta, Georgia, Howard also owns knockout victories over previously unbeaten fighters Shawndell Winters and Alex Guerrero. Howard has won five of his last seven fights since returning from a layoff in 2015.

“I’m really looking forward to this opportunity on FOX against Frank Sánchez,” said Howard. “I’ve been training very hard to be at my best for this fight. I know that I’m going to come to California and be victorious on November 7.”

A Marine Corps veteran who picked up boxing after returning from overseas, Coffie (10-0, 7 KOs) quickly impressed in amateur tournaments enough to earn sparring assignments with Deontay Wilder and Adam Kownacki. The 34-year-old was born in the Bronx, but now fights out of Brooklyn. Coffie most recently emerged victorious in a battle of unbeatens when he stopped Luis Pena in the fifth round of their August matchup on FS1.

“This is going to be a great fight against a really good opponent,” said Coffie. “This is the first step toward getting to where I want to be. Abell is a very credible opponent, and a win will justify me being able to fight higher ranked contenders in the heavyweight division. I can’t wait to go out and put on a great performance on November 7.”

Born in Neenah, Wisconsin and fighting out of Coon Rapids, Minnesota, Abell (35-10, 33 KOs) has faced an impressive lineup of top heavyweights while establishing himself as a tough veteran in the division. Abell has lined up against Tyson Fury, Tomasz Adamek, Oscar Rivas and Chris Arreola to name a few of his notable opponents. Abell owns a knockout victory in 2016 over then unbeaten Wes Nofire on FS1 and most recently stopped Quincy Palmer in the first round of their November 2019 contest.

“I’m blessed to get such a great opportunity to fight on this card,” said Abell. “It’s been a tough year for everyone but I’m looking forward to ending mine on a positive note. I’ve been training like never before. On November 7, I’ll be ready for war.”