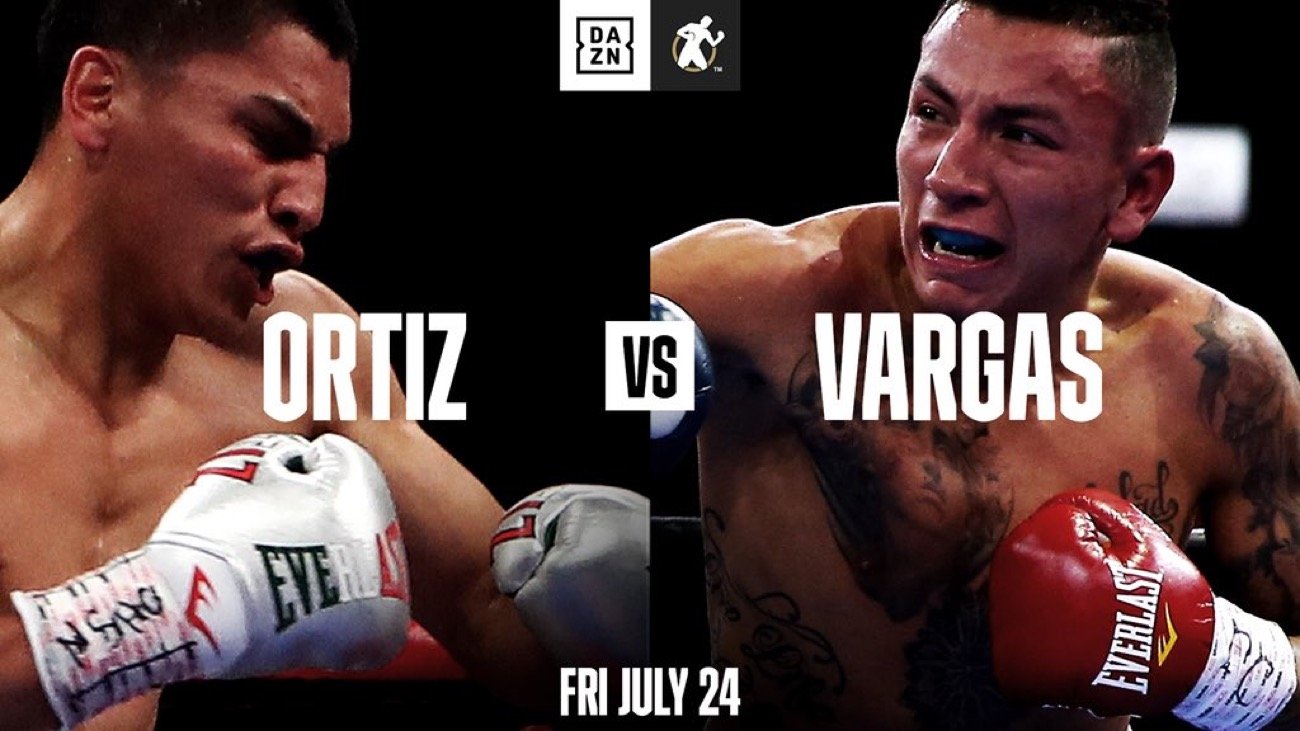 Let the countdown begin. Boxing on DAZN is back in one week with the return of the future of boxing and knockout artist, Vergil Ortiz Jr. (15-0, 15 KOs). The 2019 consensus “Prospect of the Year” faces his most dangerous challenger to date when he meets Samuel Vargas (31-5-2, 14 KOs) next Friday, July 24, live from California and exclusively on DAZN at 8 p.m. ET/5 p.m. PT.

Sharing the spotlight with the Vergil Ortiz Jr. will be undefeated prospects Seniesa Estrada (18-0, 7 KOs) and Hector Tanajara Jr. (19-0, 5 KOs) – both looking to stamp themselves as title contenders in their respective weight divisions.

As part of the countdown to boxing’s return on DAZN, tomorrow night (8 p.m. ET) Ortiz Jr. will break down his 2019 scrap against Antonio Orozco on DAZN’s weekly series, Saturday Fight Live. Watch a sneak peek now.

Download the DAZN app and sign up for ALL the big fights, on any device, for one low price. DAZN is just $99.99 for the entire year or, for those who prefer flexibility, just $19.99 a month.

Golden Boy, DAZN and Fantasy Springs Resort Casino are proud to announce the return of world-class professional boxing in Southern California! In the main event of this long-awaited comeback, Vergil Ortiz Jr. (15-0, 15 KOs) will defend his WBA Gold Welterweight Title against Samuel Vargas (31-5-2, 14 KOs) in a 12-round bout.

The action takes place on Friday, July 24 at Fantasy Springs Resort Casino in Indio, Calif. and will be streamed live on DAZN. The event will be closed to the public and media as we enter the first phase of our responsible return to regular boxing action.

“Preparing our comeback hasn’t been easy, but we know that we have a responsibility to our fighters and our fans to stage high-level boxing events as soon as we possibly can,” said Oscar De La Hoya, Chairman and CEO of Golden Boy. “This card demonstrates our commitment to presenting competitive fights despite current circumstances as the future of boxing, Vergil Ortiz Jr., will step into the ring with Samuel Vargas as was initially planned back in March.”

“And to add to that, lightweight contender Hector Tanajara Jr. is taking a big step up in competition against a veteran southpaw in Mercito Gesta,” De La Hoya continued. “Times may be tough, but our fighters are tougher, so I want to thank them for accepting these challenges during this time. I also want to thank the CSAC, Fantasy Springs Resort Casino, DAZN and everyone involved as we work together to make this a success.”

Since debuting as a professional in 2016, Ortiz Jr. has knocked out every opponent in sight. The native of Grand Prairie, Texas, who has roots in Michoacan, Mexico, will participate in his first fight of the year after a spectacular 2019 in which he stopped the likes of Mauricio “El Maestro” Herrera, Antonio “Relentless” Orozco and Brad “King” Solomon. The 22-year-old contender is a bit surprised because his 2020 debut will take place as late in the year as July, but he is nevertheless prepared for the challenge.

“I’m very thankful and excited to be headlining the first Golden Boy event after the quarantine,” said Vergil Ortiz. “I’m happy that it’s still with the same opponent, so basically we’re picking up where we left off. It’s going to be a tough fight, and it’ll be a great way to kick off the year for me.”

Vargas is recognized as one of the toughest challenges in any division. The 31-year-old native of Bogota, Colombia has faced a who’s who of welterweight boxers, including Amir “King” Khan, Luis Collazo, Danny “Swift” Garcia and Errol “The Truth” Spence Jr. Despite the uncertainty facing the world today, Vargas is totally confident that he will beat Ortiz Jr.

“I’m happy to be back to work training in Las Vegas,” said Samuel Vargas. “I think that everything happens for a reason. I think this time off benefited me. I’m ready to upset the world. I believe I can come out with a win. The world is in a weird place right now. The show will be different. There will be no fans. But I have no doubt that I am going to win.”

In the co-main event, Hector “El Finito” Tanajara Jr. (19-0, 5 KOs) will take a step up in opposition as he takes on two-time world title challenger Mercito “No Mercy” Gesta (32-3-3, 17 KOs) of Cebu, Philippines in a 10-round defense of the USNBC Lightweight Title.

“I’m ready for the best of the division,” said Hector Tanajara Jr. “I want to be a world champion, and the only way to do that is to beat tough fighters like Mercito Gesta, who has challenged for a world title and is a southpaw with a lot of experience. Also, I’m very thankful to be fighting during this time. Boxing is slowly coming back, and I’m proud to be featured on the first Golden Boy card after the big hiatus.”

“I am so excited to fight on July 24 against a talented, young, and very technical boxer in Hector Tanajara Jr,” said Mercito Gesta. “During the pandemic, I was doing conditioning training virtually with my team in San Diego, but now I am in Los Angeles training with Coach Marvin Somodio and my dad at the Wild Card Boxing gym. Even though the fight will be different this time because there will be no audience, friends or family, I’m well prepared and will put on a great show against Tanajara Jr. I hope everyone watches this card around the world, especially in my hometown of Mandaue City, Cebu, Philippines as Golden Boy boxing is back! Salamat, Mabuhay!”

Shane Mosley Jr. (15-3, 9 KOs) of Pomona, Calif. will make his debut under the Golden Boy banner in an eight-round middleweight bout against veteran Jeremy Ramos (11-8, 2 KOs) of Colorado Springs, Colorado.

Hard-hitting welterweight prospect Evan Sanchez (7-0, 6 KOs) of Parlier, Calif will open the night of action in a six-round fight.

Ortiz vs. Vargas is a 12-round fight for the WBA Gold Welterweight Title presented by Golden Boy. The event is sponsored by Hennessy “Never Stop. Never Settle.” The event will take place Friday, July 24 at Fantasy Springs Resort Casino and will be streamed live exclusively on DAZN.