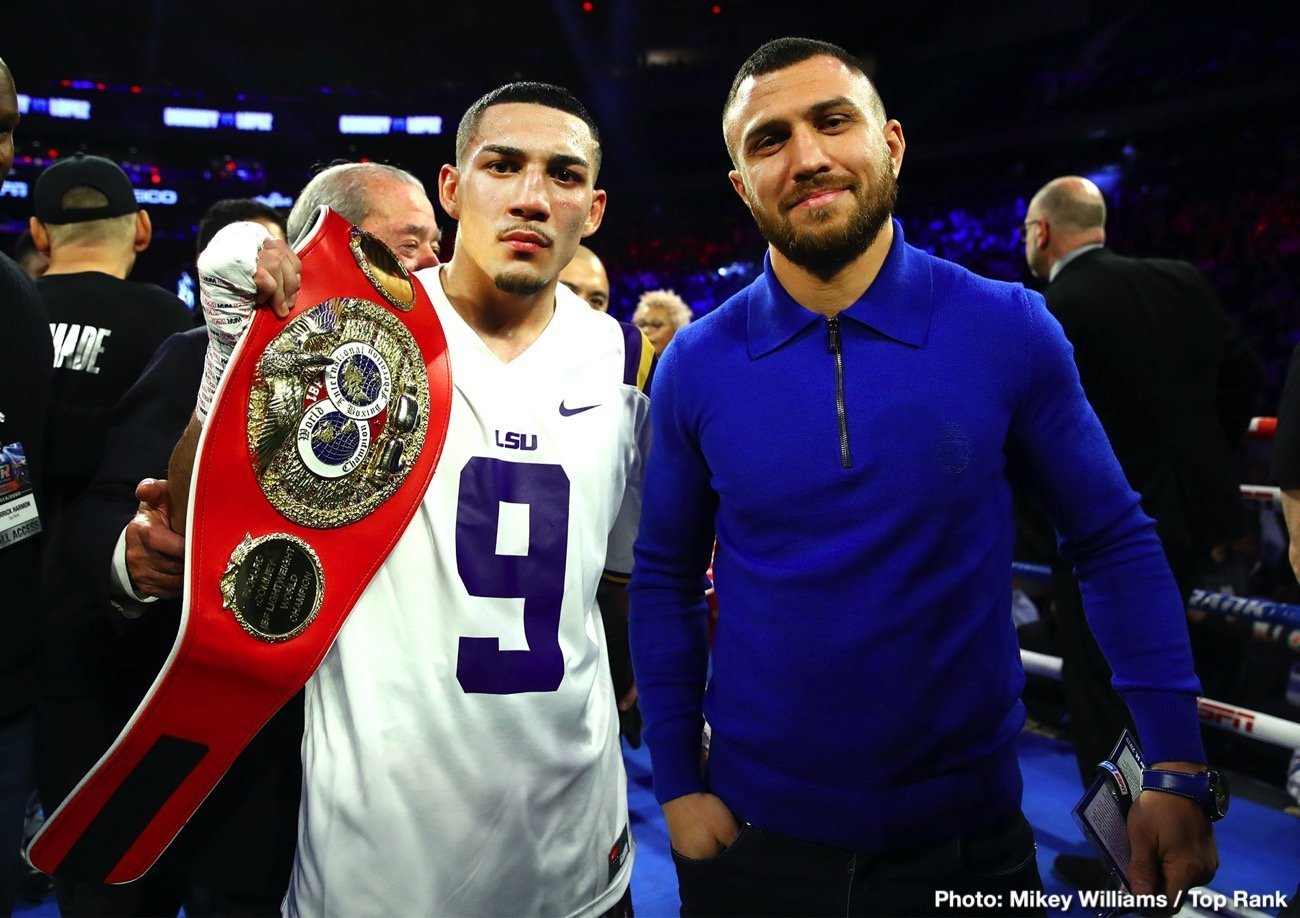 Lomachenko and Lopez had not been in the same room since last Dec.14, the night Lopez knocked out Richard Commey to win his world title. Shortly after that sensational knockout, Lomachenko entered the ring and welcomed Lopez to his club.

The lightweight champions sat 12 feet apart on a stage inside the ring. The tension never boiled over, but it was palpable. This is what they had to say.

“I won’t know {how the layoff will impact me} until Saturday night. I have never been out of the ring for one full year like this. Ever. I don’t know how it will be.”

“I think it’s just a ring and judges and TV. That’s it. And, of course, four belts.”

“I’m thinking only about my future fight and the fight on Saturday. That’s it.”

“Hard work pays off. Eighteen years in, and it’s just the beginning, You haven’t seen anything yet.”

“The Takeover is not just a phrase we throw out there. This is the part where I’m leading the new generation. Winning this is a stamp and a mark to put on for the new era.”

“Get your popcorn ready and just enjoy the show. It’s ‘The Takeover.'”

“Lomachenko-Lopez is the best fight that can be made in boxing, and we are delighted that it will be available to fans for no extra charge live on ESPN,” said Top Rank chairman Bob Arum. “Teofimo and Vasiliy demanded the fight, and we are glad we could make it happen. Vasiliy has never backed down from a challenge since he turned pro under the Top Rank banner, and Teofimo is a fearless young champion daring to be great. This has all the makings of a modern boxing classic.”

Lomachenko said, “Teofimo Lopez can talk all he wants. He’s very good at talking. He has done nothing but say my name for the past two years. I am a fighter, and my goal is to win another world title. Good for Teofimo. When we fight in Las Vegas, he will eat my punches and his words. I will be the better man, and four world titles will come home with me to Ukraine.”

Egis Klimas, Lomachenko’s manager, stated, “Nobody has seen Lomachenko at 100 percent inside the ring. If Teofimo can push Loma to at least 80 percent, it means Teofimo is the best opponent Loma has faced.”

Lopez said, “I will beat up Lomachenko and take his belts. Simple as that. I’m coming to Las Vegas to make history. I don’t like the guy, and I’m going to have fun as Lomachenko’s face is beaten and marked up by my hands. The Takeover is here, and the reign of Lomachenko, the little diva, is coming to an end.”

Added Matt Kenny, Vice President, Programming and Acquisitions, ESPN: “Boxing has long been part of the fabric of our company and we could not be more excited for the October schedule on ESPN platforms, which includes the highly anticipated lightweight title bout between Vasiliy Lomachenko and Teofimo Lopez on October 17. Top Rank was one of the very first organizations to safely stage live events during the pandemic and as the calendar turns to fall, ESPN will be home to fights that will excite boxing enthusiasts and capture the attention of casual fans.”

Lomachenko (14-1, 10 KOs) enters this bout coming off a scintillating decision win over British star Luke Campbell last August in front of a sold-out O2 Arena in London. A two-time Olympic gold medalist who went 396-1 in the amateur ranks, Lomachenko tied a boxing record by winning a world title in his third pro fight. He is a former featherweight and junior lightweight world champion who won the lightweight crown in May 2018 with a body shot knockout over Jorge Linares. In seven years as a pro, Lomachenko is 13-1 with 9 knockouts in world title fights and is ranked by many pundits as this generation’s most accomplished pugilist. From 2016-2017, he made four consecutive fighters quit on their stools, earning him the “No-Mas-chenko” moniker.

Lopez (15-0, 12 KOs), the brash Brooklynite who initially gained attention because of his post-fight “Fortnite” dances and backflip celebrations, soon emerged as boxing’s most charismatic young superstar following his 2016 pro debut. He was the consensus 2018 Prospect of the Year, a campaign punctuated by a one-punch, first-round knockout over Mason Menard on the Lomachenko-Jose Pedraza undercard. Following the Menard knockout, he donned the jersey of Kyler Murray, who’d won the Heisman Trophy earlier that evening. Lopez climbed the rankings in 2019 with wins over Diego Magdaleno, Edis Tatli and Masayoshi Nakatani.

Last December, Lopez knocked out Richard Commey in two rounds to win the IBF world title. Sitting ringside was Lomachenko, who entered the ring during the post-fight pandemonium. Arum waved him over to take a photo with the newly crowned champion. The stage had been set. #LomaLopez was going to happen.

The televised opener will see super middleweight knockout sensation Edgar Berlanga test his perfect record against veteran Lanell Bellows in an eight-rounder. Berlanga (14-0, 14 KOs) has won all 14 of his professional fights by first-round stoppage.

“Lomachenko-Lopez promises to be a classic, and the rest of the ESPN-televised card will set the table,” said Top Rank chairman Bob Arum. “Barboza and Saucedo are players in the deep junior welterweight division, and both men are ferocious competitors. The winner is ready to challenge for a world title. As for Edgar Berlanga, every time he steps in the ring, he impresses me more and more. I haven’t seen a young puncher like him in quite some time.”

Saucedo (30-1, 19 KOs), the thunderous slugger from Oklahoma City, has won a pair of fights since falling short to Maurice Hooker in a November 2018 bid for the WBO junior welterweight world title. He is entering his third bout with head trainer Pedro Neme, a union that has paid dividends thus far. Saucedo knocked out Rod Salka in the first round last November and made his “Bubble” debut June 30 with a one-sided decision over Sonny Fredrickson.

Barboza (24-0, 10 KOs), from South El Monte, Calif., is a seven-year pro who is ranked in the top 10 by the WBO and WBC at 140 pounds. He graduated from prospect to contender with victories over the likes of Mike Reed, Mike Alvarado and William Silva. He last fought Aug. 29 as the co-feature to the Jose Ramirez-Viktor Postol junior welterweight world title bout and cruised to a one-sided decision over Canadian veteran Tony Luis.

“Arnold is a very versatile fighter, so we are preparing for everything,” Saucedo said. “I know it will be hard to steal the show from Lomachenko-Lopez, but I’m coming in to put on a memorable fight for the fans. I feel like people still doubt me from the Maurice Hooker fight, and I can’t wait to show everyone all of my tools.”

“This fight, and fighting on such a significant card, means the world to me,” Barboza said. “It’s time to put the 140-pound division on notice. I respect Saucedo, but he’s in my way as I strive to earn a world title opportunity.”

Berlanga has combined flash with unique power to earn headlines despite not having seen the second round as a pro. The record for consecutive first-round knockouts to begin a career is 21, held by the late Ali Raymi. Berlanga made his “Bubble” debut on July 21 and stopped Eric Moon in 62 seconds, which equaled the fifth-shortest outing of his career. Bellows (20-5-3, 13 KOs) has never been stopped as a pro and has made his bones testing young prospects. He is coming off a fourth-round stoppage over Malcolm Jones, who entered the fight with a 15-1 record.

“I’m dedicating this fight to my family and Puerto Rico. I want to continue to shine like a bright star and carry the flag on my back,” Berlanga said. “Bellows has never been stopped, but I intend to be the first man to stop him. He’s a strong fighter, and I hope to get some rounds in. I want to show that I’m a versatile boxer and not just a puncher. One thing I will guarantee is another explosive performance.”