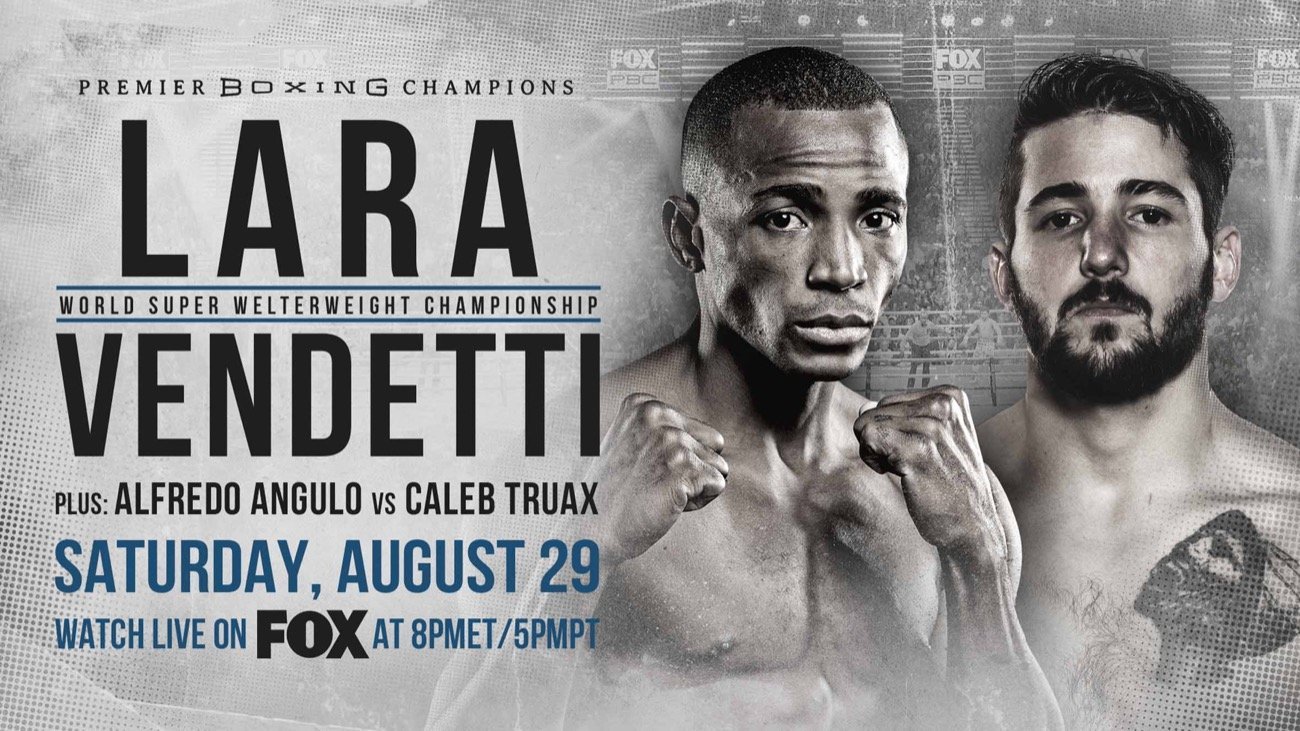 The event will be promoted by TGB Promotions and will take place without fans in attendance at the Microsoft Theater, an AEG venue, in downtown Los Angeles. Angulo vs. Truax is promoted in association with Warriors Boxing.

Here is what the conference call participants had to say Wednesday:

“I feel better than ever. I’ve been training hard and working well heading into this fight. I feel stronger than I did a couple of years ago and I’m totally ready for this fight on Saturday.

“The difference people have seen in my last few fights isn’t about my fighting style or even about trying pleasing the fans. I just do what is needed inside of the ring. I have to see what each fight requires me to do. If it pleases the fans, then that’s great. But I’m always focused on doing what I have to do in each situation during each fight.

“I’m not focused on my legacy yet. There is a lot to accomplish still and I want to bolster my standing as one of the best Cuban fighters in history with more important wins.

“I still feel like I can have a lot of success in the rest of my career, so I haven’t set any time frame for when I’ll be done boxing. But once I feel the difference in my training and when the young fighters are really getting the best of me, then it will be something to consider. But it’s not on my mind.

“I really haven’t seen Vendetti at all. I don’t like to watch video of my future opponents. For me, the style will become clear in the first round once we start throwing punches in the ring.

“I firmly believe that I can be the undisputed best fighter in this division. Most of the other champions haven’t faced me yet. We’ll see how it plays out, but I believe that I can come out on top against anybody at any time in a very competitive division.

“I never lost any confidence. Regardless of any circumstances after the Canelo fight or the Jarrett Hurd fight, I always believe in my abilities in the ring. That belief is still very strong. I’m willing and able to fight anyone in the division at any time.

“I want everyone to know that I’m in great shape, I’m feeling outstanding and ready to put on a show Saturday night.”

“I think we’ve done all we can to prepare for this fight. Every box is checked. I’m in a position to do my best and I’m excited and confident for this opportunity

My trainer has been saying for years that I have a good style to face Lara and once I got the call, I took it as a real sign. I’m really motivated to show everyone what I can do and put on my best performance.

“I look at it like this is just another human like me that I’m facing. He’s made of skin and bones and I’m sure he has his doubts about himself. Maybe about his age and about if I can get to him. I don’t get intimidated by anything in the ring. I’m just really excited to test myself against one of the best fighters of this generation.

“I just have to prepare the best and I can and perform the best I can. I can’t control anything else. Could this be my only title shot? Maybe, but thinking about that won’t change anything in the ring. I just have to give myself the best shot to win.

“It will be a little strange without fans. If anything I think it will help me. It allows me to focus better. It doesn’t matter how much experience you have, the crowd can make you more aggressive than you want to be and influence the judges. If anything, it will help me, but it is what it is.

“I’ve approached this fight like I’m getting the best version of Lara that’s ever existed. I’m not taking him lightly at all. But if you look at his performances as of late, it’s not the same Lara you saw against Angulo and Canelo years ago. The agility is not there as much. It almost seems like he’s doing just enough to try to win these fights and not really going the extra mile to dominate.

“Pressure is the name of the game. I have to be active. I can’t run in and get blasted, but I’m going to try to push the pace as best I can and be as smart as I can. I’m predicting an exciting fight, at least on my end.”

Truax Out Due to Dehydration, Hernandez To Face Angulo on Saturday

Mexico’s Vladimir Hernandez will step in to face hard-hitting Alfredo “El Perro” Angulo in a 10-round super middleweight contest that serves as the co-main event of FOX PBC Fight Night and on FOX Deportes this Saturday, August 29 from Microsoft Theater in Los Angeles.

Caleb Truax was originally scheduled to face Angulo, but was forced to withdraw due to effects of dehydration.

“We wish Caleb the best and hope to see him back in the ring soon, but it is fortunate that we have backups in place because of COVID-19,” said Tom Brown, President of TGB Promotions. “Under normal circumstances you wouldn’t have a backup on standby. But because of COVID-19, we have someone who has been training, has been tested and is in the bubble and ready to go.”

Angulo (26-7, 21 KOs) enters this fight after winning an action-packed battle against former champion Peter Quillin last September, under the tutelage of highly regarded trainer Abel Sanchez. The Mexicali, Mexico native, who now lives in Coachella, California, has been in with some of the sport’s top boxers and sluggers during a career that has seen him in numerous exciting bouts against the likes of Saul “Canelo” Alvarez and Erislandy Lara, amongst others.

The 31-year-old Hernandez (11-4, 6 KOs) was born in Ciudad Lerdo, Durango, Mexico and now lives and trains out of Denver, Colorado. Hernandez’s last six bouts have come in the U.S., including an upset over previously unbeaten Daniel Valdivia, that he followed up by defeating Valdivia in their rematch. Most recently, Hernandez scored a decision victory over Aaron Coley in July to bounce back after two defeats.

Born in Dallas and now fighting out of Las Vegas, Martínez (8-0, 6 KOs) made his pro debut in the U.S. in 2016 by stopping Phillip Percy in round two. The 24-year-old returned to fight in the states in his last outing, when he knocked out the previously unbeaten Jose Rodriguez in the third round of their November 2019 clash.

The 28-year-old Arcón (10-0, 10 KOs) will look to keep his perfect knockout streak intact when he steps into the ring on Saturday night for his 2020 debut. Born in San Juan de Los Morros, Venezuela, and now fighting out of Coachella, California, Arcón added five knockout victories to his record in 2019, most recently stopping Jasond Prado in December.

Preceding the action on FOX, FS1 PBC Fight Night will be headlined by super welterweight contenders Thomas “Cornflake” LaManna and Brian Mendoza battling in a 10-round attraction.

Pauldo (13-1, 7 KOs) returns to make his 2020 debut after a 2019 campaign that saw him score first round knockouts over Federico Jesus Malespina and Tyrone Luckey. The 25-year-old from Orlando had previously earned a career best victory in winning his first eight-round fight via a unanimous decision over then unbeaten Joshua Zuniga in 2018.

A native of Tegucigalpa, Honduras, Ruiz (21-3-3, 14 KOs) now fights out of Miami since making his U.S. debut there in March 2019. The 26-year-old has fought in the U.S. for his last five bouts, including most recently losing a decision against unbeaten Gabriel Flores, Jr. in June. Prior to that fight, Ruiz had been on a seven-fight winning streak dating back to 2016.

Valenzuela (5-0, 2 KOs) returns to the ring for his 2020 debut after picking up three victories in 2019, including most recently defeating Charles Clark in September. The 21-year-old was born in Los Mochis, Sinaloa, Mexico but now lives and trains in Seattle, Washington alongside unbeaten star David Benavidez.

The 29-year-old Kuhn (10-5-1, 5 KOs) steps into the ring after his most recent outing saw him knockout Donny Miller in round three of their December 2019 contest. Fighting out of Charleston, West Virginia, Kuhn has fought professionally since 2010.