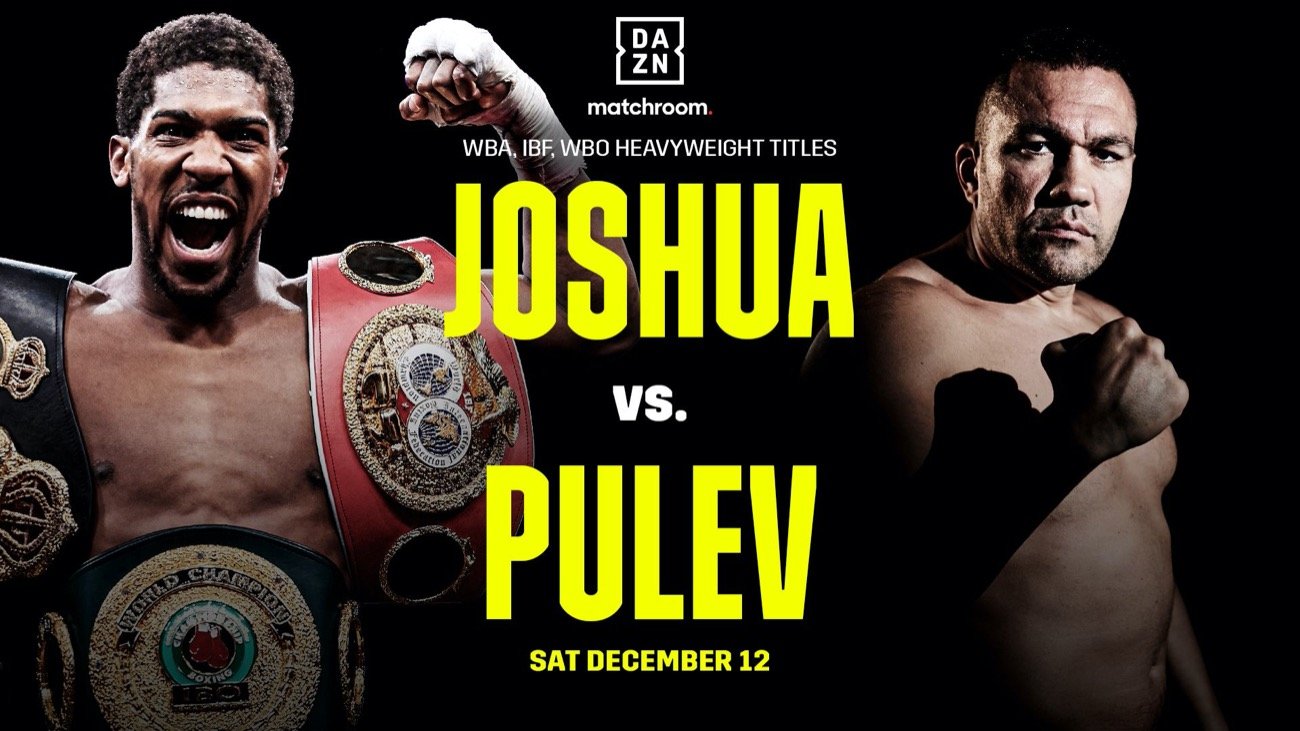 Unified Heavyweight Champion of the World Anthony Joshua OBE will defend his IBF, WBA, WBO, and IBO World Titles against Mandatory Challenger Kubrat Pulev at The O2 in London on Saturday, December 12.

Joshua vs Pulev will be shown on Sky Sports Box Office in the UK and DAZN in all of its nine markets including the U.S., on a show promoted by Matchroom Boxing in association with Top Rank and Epic Sports and Entertainment.

Joshua (23-1, 21 KOs) recaptured his belts and position as the Unified Heavyweight World Champion with a masterful unanimous decision victory over Andy Ruiz Jr at the Diriyah Arena in Saudi Arabia on a historical night in December that saw the Heavyweight World Titles contested for the very first time in the Middle East.

December 12 will be ‘AJ’s’ first fight on UK soil in over two years since he defended his crowns with a devastating seventh-round knockout of Russia’s Alexander Povetkin at Wembley Stadium. The former Finchley ABC man will be aiming to deal with Pulev in style to set up an Undisputed showdown against WBC Champion and fellow Brit Tyson Fury in 2021.

Kubrat Pulev gets another title shot

Pulev (28-1, 14 KOs), the IBF’s No.1-ranked Heavyweight Mandatory Challenger, gets his second shot at World honors after his defeat to modern legend Wladimir Klitschko in 2014 – the only loss of his 29-fight professional career. Since then, he has won six fights in a row, including victories over Derek Chisora and an IBF Eliminator win over Hughie Fury in 2018.

The Bulgarian superstar was set to challenge Joshua at Cardiff’s Principality Stadium in October 2017 but was forced to withdraw through an injury and will now get his opportunity to ruin the champion’s plans to face Fury in an all-British blockbuster showdown in the future.

“December 12 is the date, and once again, the Heavyweight belts go up in the air, and it is my sole focus to make sure that come December 13, they are in their rightful place in the UK,” said Joshua.

“The O2 is the original lion’s den, I have a lot of history with the arena, but without the fans, something huge is missing. I am hoping that safety permitting, we might bring some boxing fans in, but we will have to see. And I respect every opponent, and I respect Pulev. I wish him well during his preparation.”

“For a small Bulgaria country to stand up for the Heavyweight Titles is a great accomplishment,” said Pulev. “This fight is for my late father and all Bulgarians around the world! I’m coming to London to seize the Heavyweight Championship of the World.”

“After a challenging year for everyone, to end with the unified World Heavyweight Championship is very special,” said promoter Eddie Hearn. “Over a year after regaining his crown, Anthony Joshua takes on yet another dangerous opponent in Mandatory Challenger Kubrat Pulev. AJ’s resume is unrivaled, and this is the final hurdle until we challenge the undisputed crown next year.

Joshua vs. Pulev without fans

“Whilst it’s unusual to think of an AJ fight without tens of thousands of fans in attendance, we will be doing everything we can to lobby for the safe return of fans to this event; we have to move forward together.

“I know Team Pulev and Bob Arum will be doing all they can to become World Champion on Dec 12, but AJ constantly evolves and improves, and I expect a dominant performance and a spectacular KO to close out 2020.”

258 Managing Director Freddie Cunningham said: “Anthony again shows his willingness and desire to chase the Undisputed Title with another tough mandatory fight, and despite the challenges of making a fight of this scale during these times, it is important for AJ to keep momentum.

It will be an exciting way to end the year and unique in every way. We will be working with Matchroom to build a card full of 258 fighters to give the fans entertained throughout the undercard.”

AJ to try and keep his titles

John Wirt, President of Epic Sports and Entertainment, said: “Crowd or no crowd, we are coming to AJ’s backyard to claim the titles. Come December 12; there will be no more excuses or delays. I guarantee that it will be an epic battle and that Kubrat will stop AJ inside the distance.”

“Anthony Joshua returns to the ring, a year after recapturing his World Titles from Andy Ruiz Jr, and Britain’s Unified World Champion will be determined to reign supreme in a hotly-contested Heavyweight division,” said Adam Smith, Head of Sky Sports Boxing Development.

“Kubrat Pulev has proven pedigree, with just that sole defeat to Wladimir Klitschko, and he’ll be hoping to send more shockwaves through the sport with an upset victory, but I know that AJ has been training tirelessly, priming his explosive power for another night of fireworks.

Fury will be watching

“Tyson Fury will, of course, be watching – as an Undisputed World Title fight is within touching distance – and AJ cannot afford a slip-up in a blockbuster ending to the boxing year,” said Smith.

“We’re thrilled to bring the Heavyweight Championship of the World to all DAZN subscribers,” said DAZN EVP Joseph Markowski. “AJ-Pulev will have major consequences for the entire boxing landscape as both men aim to end the year emphatically.”