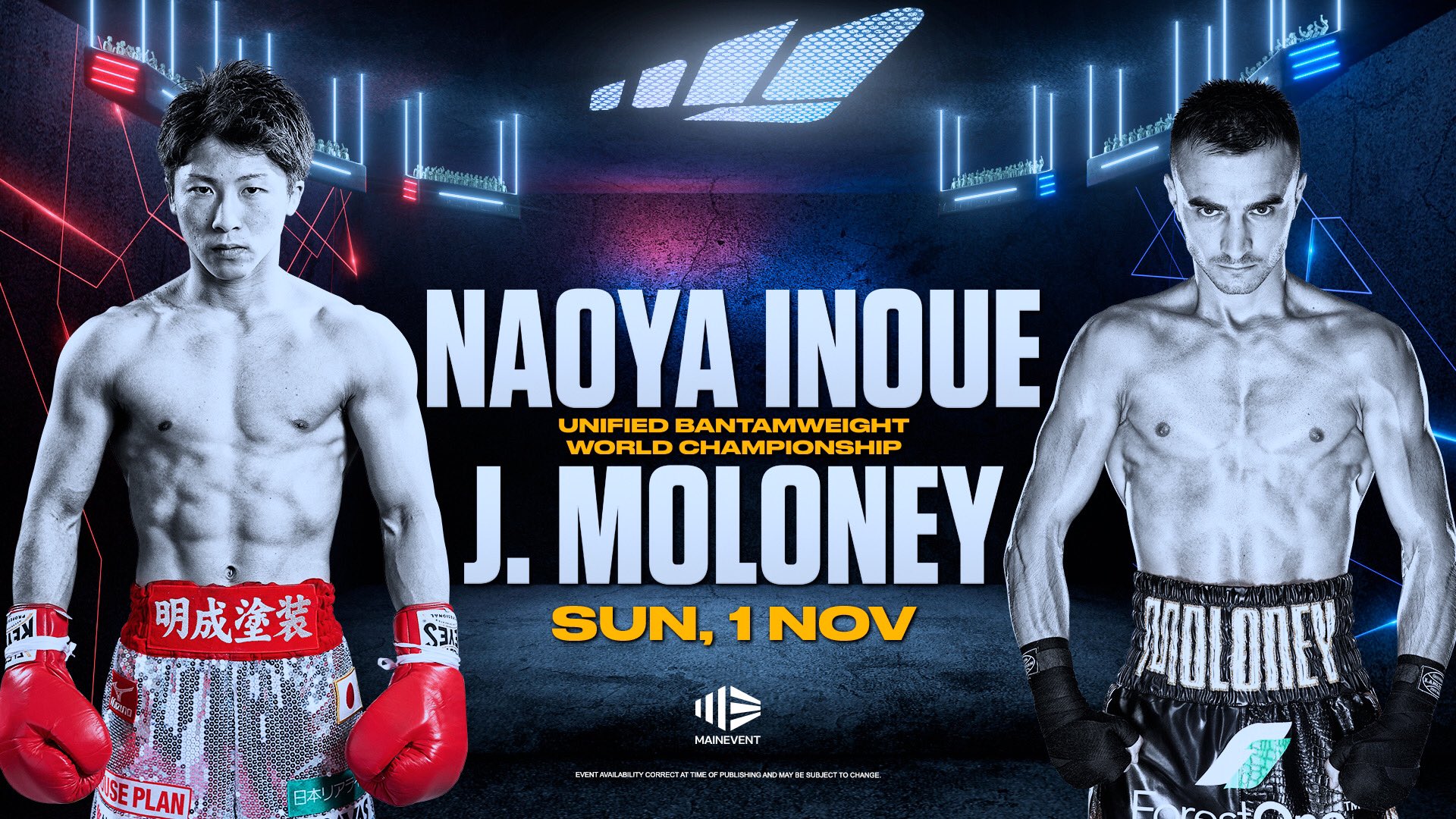 Naoya “Monster” Inoue, the Japanese three-weight world champion and pound-for-pound talent, is two days away from his Las Vegas debut. He will defend his WBA/IBF/Ring Magazine bantamweight world titles against Australia’s Jason Moloney (ESPN+, 7:30 p.m. ET), his first bout since his 2019 Fight of the Year victory last November against Nonito Donaire.

For as much noise as Inoue (19-0, 16 KOs) makes inside the ring, he is quiet and measured behind the microphone. Inoue and Moloney (21-1, 18 KOs) met face-to-face for the first time Thursday at the final press conference, along with the co-main event featuring WBO female junior lightweight world champion Ewa Brodnicka (19-0, 2 KOs) and mandatory challenger Mikaela Mayer (13-0, 5 KOs).

This is what they had to say.

“This past year, my injuries have healed very well. With COVID-19, it’s has been tough training, but it has been the same for everyone else. We still have to go out there and perform at a high level. I see him as a high-level, all-around fighter.”

“I think that everything happens for a reason, and that loss that I suffered against {Emmanuel} Rodriguez showed me how much I want this. I will not let myself lose again. On Saturday night, nothing will stop me, and I will become the best bantamweight in the world.”

“He has never faced a fighter as relentless as me. I’m going to take him to places he has never been before.”

“I can’t wait. There has been a lot of talk about ‘The Monster’ coming to Las Vegas, but people haven’t seen what I can do inside those ropes.”

“I feel great. I feel like I’m deserving. I’ve been the No. 1 contender for a long time. This fight will put me a step {closer to} my goal.”

“I think that she is concerned. She has never been in the ring with someone like me.”

“This is a team effort. We have been together for a long time. It started 11 years ago with the Olympic trials. It will mean a lot to me to make {head trainer} Al {Mitchell} proud on Saturday night.”

“She is the No.1 contender, but I think this fight was going to happen anyway.”

“I brought my belt just to show it to you. Look at it. I didn’t bring this belt to give it to you. That’s not happening. For sure.”

“I have a lot of things against me. But I’m ready. I don’t care if she says that she doesn’t respect me. She makes a lot of mistakes, and I’m going to take advantage of all of them.”

Mikaela Mayer called on the junior lightweight world champions for a fight. One of them was mandated to answer.

Inoue-Moloney and Brodnicka-Mayer will headline an evening of boxing live and exclusively on ESPN+ beginning at 7:30 p.m. ET/4:30 p.m. PT.

“After Mikaela’s last performance, I promised her a world title fight. She’s asked to fight the champions, and I am confident she will make a statement to the rest of the women in and around her weight class,” said Top Rank chairman Bob Arum. “We’ve watched her progress since her pro debut, and she has turned into one of the premier fighters in female boxing. This WBO belt will be the first of many world titles for Mikaela.”

Frank Smith, CEO of Matchroom Boxing, Brodnicka’s co-promoter, said: “We’re happy to be working with our friends at Top Rank on another great fight. Ewa Brodnicka has proved herself to be one of the best 130-pound fighters on the planet with five defenses of her WBO world title, and I’m backing her to make it six successful defenses when she meets the undefeated Mikaela Mayer on Oct. 31. This is a top matchup at a time when women’s boxing grows from strength to strength.”

Brodnicka (19-0, 2 KOs), from Poland, has fought all of her pro bouts in her home country and has gone the 10-round distance on 10 occasions. She participated in the final world title bout before the COVID-19 pandemic March 7, winning a unanimous decision over Djemilla Gontaruk in Dzierżoniów, Poland. Before capturing world title honors at junior lightweight, Brodnicka reigned as European lightweight champion.

Brodnicka said, “I am excited that my title defense against Mikaela is happening in America, where I’ve always wanted to fight. I am more than ready for this opportunity, and I would like to thank my promoters, Eddie Hearn and Mariusz Grabowski, for helping make this fight a reality.”

Mayer (13-0, 5 KOs), from Los Angeles, turned pro under the Top Rank banner almost one year after representing the United States at the 2016 Rio Olympics. She made her pandemic return July 14 and bested two-time world title challenger Helen Joseph over 10 rounds. Matchroom Boxing announced it had signed Brodnicka to a promotional contract on Aug. 6, but later that day, the WBO ordered Brodnicka to defend her world title against Mayer.

“I’ve made huge improvements to my boxing skills over the last 10 months. You saw some of it in my last fight against Helen Joseph, but I’ve reached a whole new level this fight camp,” Mayer said. “I’m more than prepared for this WBO world championship fight, and I will absolutely be going home with the belt. This fight will not go the distance. Ewa Brodnicka is not on my level, and her time is up. Tune in and watch me bring the championship belt to ESPN and Top Rank.”

Robson Conceição, a 2016 Olympic gold medalist for his native Brazil, seeks to notch the signature win of his unblemished professional career when he takes on Luis Coria in a 10-round junior lightweight fight Saturday, Oct. 31 from the MGM Grand Las Vegas Bubble.

The card will also feature Toledo’s 20-year-old heavyweight sensation, Jared “The Real Big Baby” Anderson (6-0, 6 KOs), who will fight Luis Eduardo Pena (6-1, 6 KOs) in a six-rounder. Anderson has three knockout wins inside the Bubble and four first-round stoppages in his young career.

The entire Inoue-Moloney card will stream live on ESPN+ beginning at 7:30 p.m. ET, with the co-feature (Brodnicka-Mayer) expected to start at approximately 10 p.m. ET.

Conceição (14-0, 7 KOs) turned pro under the Top Rank banner in 2016 after an amateur career that included the Olympic gold medal, more than 400 victories and two World Championship medals. He last fought in August in Sao Paulo, Brazil, and knocked out Eduardo Reis in the second round. Conceição takes a giant step up in class against Coria (12-3, 7 KOs), a Robert Garcia-trained fighter who is coming off a razor-thin majority decision loss in June against Adam Lopez in one of the year’s best back-and-forth brawls.

In other undercard bouts:

“Hammer Hands” Rodriguez is 4-0 with three knockouts since returning from a nearly two-year layoff last July, re-establishing himself as one of the 140-pound division’s top prospects. He made his Bubble debut Aug. 22 and knocked out the previously undefeated Anthony Laureano in the first round. Rodriguez turned pro in 2013 as an 18-year-old, and at 25 years old, is approaching contender status.

Rodriguez, a 20-year-old southpaw prodigy from San Antonio, Texas, put forth a star-making performance inside the Bubble Sept. 5, knocking down the normally iron-chinned Janiel Rivera three times en route to a first-round stoppage. Trained by Robert Garcia and promoted by Teiken Promotions, Rodriguez has won four straight bouts by stoppage, and his sublime footwork reminds many boxing observers of Vasiliy Lomachenko.

Hiraoka, a stablemate of Inoue’s from Yokohama, Japan, made his U.S. debut last November and knocked out Rogelio Casarez in two rounds. A former high school distance-running star, the 24-year-old also bested former world title challenger Akihiro Kondo via 10-round decision in July 2019. Edwards, from Paterson, N.J., hopes to snap a two-bout losing skid and pick up his third victory over a previously undefeated prospect.

Cortes returns for his second Bubble bout nearly four months removed from his July 7 slugfest against Alejandro Salinas. Cortes recovered from a fourth-round knockdown to earn an eight-round unanimous decision. As an amateur, he notched a pair of victories over undisputed lightweight world champion Teofimo Lopez. Acosta, from Long Beach, Calif., has won three consecutive fights since a six-round decision defeat to Ruben Torres.