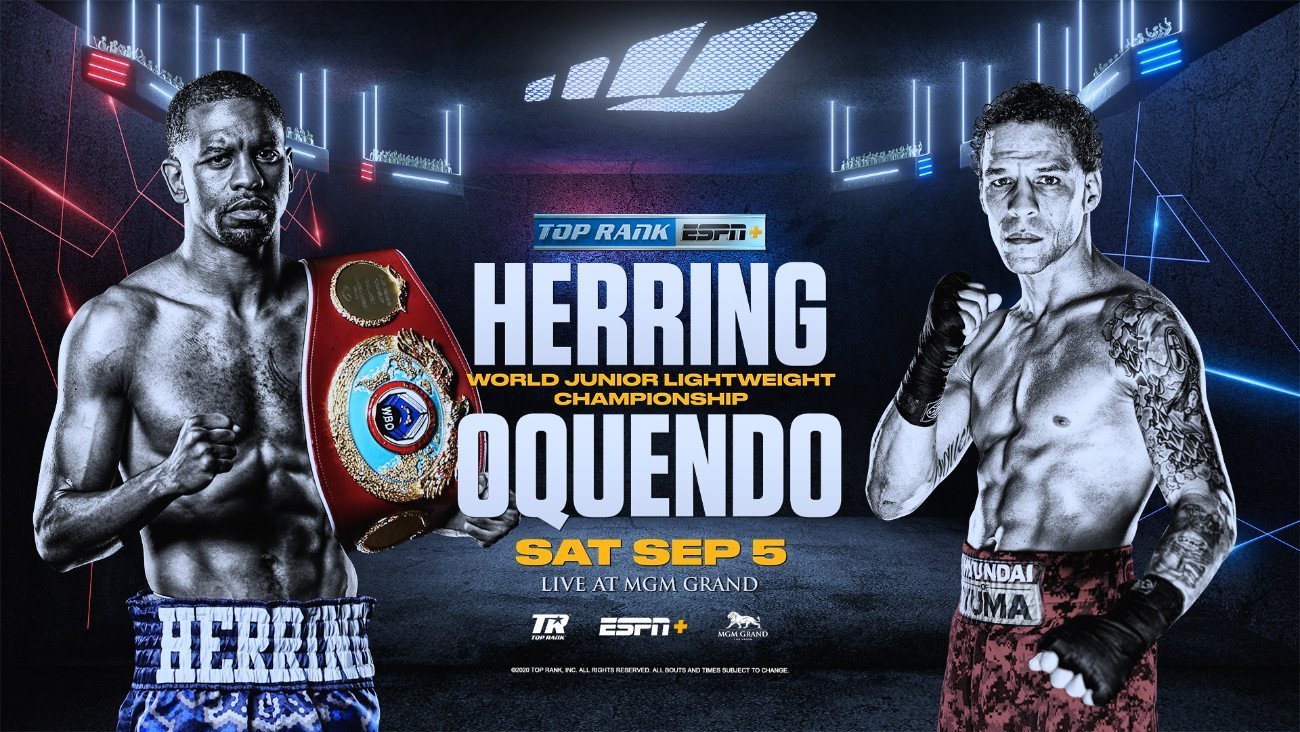 In the 10-round super middleweight co-feature, it’s a battle of the Midwest as Omaha’s unbeaten Steven “So Cold” Nelson takes on Toledo’s DeAndre Ware.

Herring-Oquendo and Nelson-Ware will stream live on ESPN+ at 10 p.m. ET, with undercard action to stream on ESPN+ beginning at 7:30 p.m. ET.

“Jamel has had a run of bad luck, but his fortunes will change for the better inside the ‘Bubble’ on September 5,” said Top Rank chairman Bob Arum. “Oquendo is a crafty veteran who understands this may be his last shot at a world title, and I expect him to give ‘The Fighting Marine’ one heck of a fight.”

Herring said, “This postponement is a blessing in disguise because I feel 10 times better than I did three weeks ago. I’m grateful to have another opportunity to get back in the ring. I’ve fully recovered from COVID-19 and I’m more than ready for anything Jonathan Oquendo brings on September 5. Our team has a great game plan and we are eager to carry it out.”

Oquendo said, “I am very happy with finally getting this opportunity to challenge Herring for his world title, as the fight has been canceled twice because of COVID-19. At one point, I thought that maybe the fight was not going to happen, but thanks to God, we are now ready for September 5.

“We are going to win. We are in a very positive mindset. We are going to leave everything in the ring. It’s now or never. It would be a great accomplishment to become world champion at 37. That’s what we are going to do.”

Herring (21-2, 10 KOs) returns following the longest layoff of his career, nearly 10 months since he outpointed the previously unbeaten Lamont Roach Jr. at an outdoor ballpark in Fresno, Calif. Soon after his most recent positive COVID-19 test, he received a clean bill of health and resumed training camp in Omaha, Neb. Oquendo (31-6, 19 KOs) rebounded from a March 2019 decision defeat to Roach to shut out Charles Huerta last September. He is 5-1 since a December 2015 defeat to Jesus Cuellar for the WBA featherweight world title.

Nelson (16-0, 13 KOs), who trains alongside Herring and pound-for-pound king Terence Crawford in Omaha, recently moved down from light heavyweight and is ranked No. 8 by the WBO at super middleweight. He last fought in January, knocking out then-unbeaten prospect Cem Kilic on ESPN. A talented artist who designs his fight night attire— he entered the ring as The Grinch with a Santa hat against Kilic — Nelson hopes to notch his fourth knockout in a row. Ware (13-2-2, 8 KOs), a Toledo firefighter when he’s not fighting in the ring, is two fights removed from a February 2019 decision win over the previously unbeaten Ronald Ellis.

Nelson said, “I’ve been training and staying ready in Omaha with my team. Now it’s time to clock in for overtime. No audience? I don’t need cheers to do my job. I’m focused on the task at hand, which is to defeat DeAndre Ware.”

Anderson will take on nine-year pro and noted spoiler Rodney Hernandez in a bout scheduled for eight or six rounds on the undercard of an action-packed doubleheader featuring Jamel Herring’s WBO junior lightweight world title defense against Jonathan Oquendo and unbeaten super middleweight Steven Nelson against DeAndre Ware in a 10-rounder.

Anderson said, “I’ve made my home in the ‘Bubble’ this summer, and I’ve enjoyed coming to Las Vegas and putting on a heavyweight show for the fans. I don’t know too much about Rodney Hernandez, but I know he’s been in there with a lot of top guys and usually goes rounds.

“I can’t wait for this one. Top Rank keeps lining these guys up, and I’m knocking them out.”

The 20-year-old Anderson (5-0, 5 KOs) has opened eyes with four first-round knockouts in five outings since making his professional debut last October. He spent the early part of 2020 in camp with Tyson Fury as the lineal heavyweight champion readied to battle Deontay Wilder. When boxing returned, Anderson knocked out Johnnie Langston in three rounds in June and stopped Hector Perez in one round the following month. Hernandez (13-9-2, 4 KOs) has four wins over previously undefeated prospects, including a first-round stoppage over Onoriode Ehwarieme, who was 17-0 at the time.

In other undercard action:

In a six-round battle of unbeaten welterweights, Christopher Gonzalez (7-0-1, 1 KO) will face D’Andre Smith (8-0, 5 KOs). Gonzalez, a ticket-seller in his hometown of Tucson, Ariz., has won four in a row since the lone draw on his ledger.

Philadelphia native Rashiem Jefferson (1-0), a former U.S. amateur star, will return to the ring against Jose Martinez (2-1, 1 KO) in a four-rounder at featherweight.