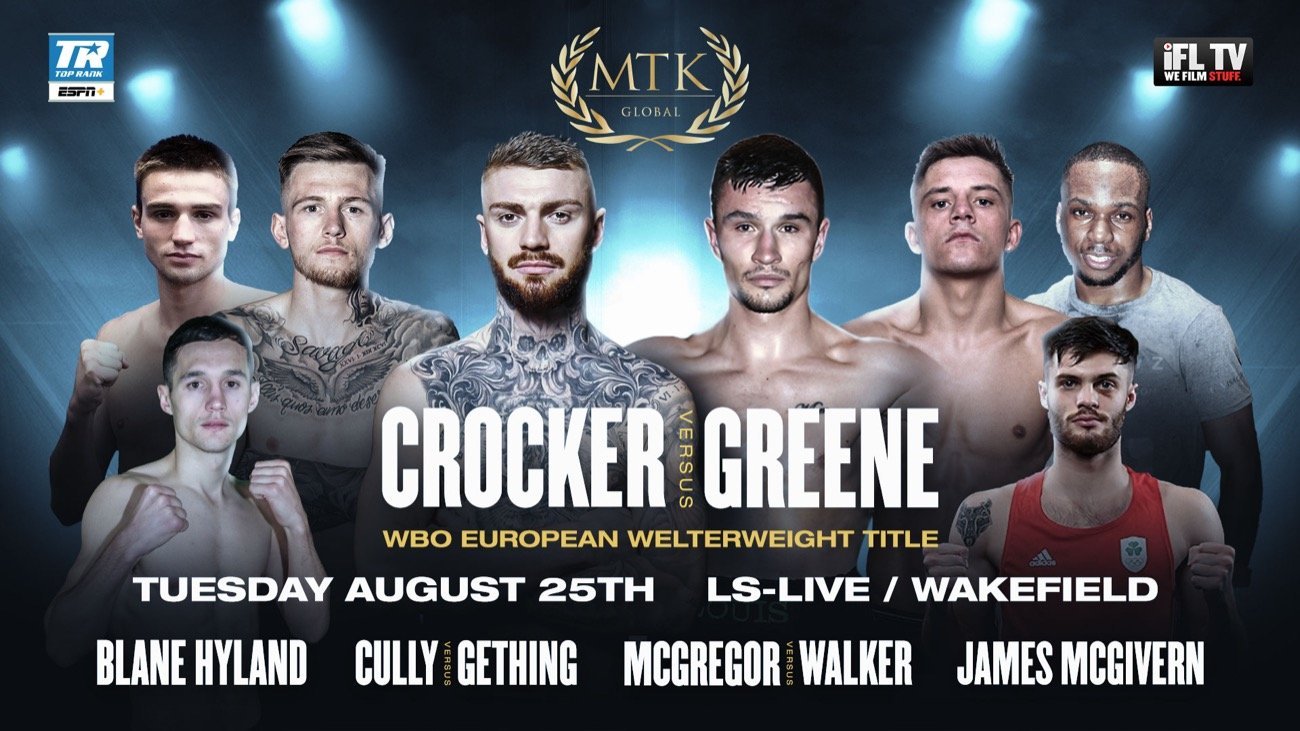 Lewis Crocker has a very simple message ahead of his #MTKFightNight main event against Louis Greene next week: Expect fireworks.

Unbeaten Crocker (11-0, 6 KOs) faces former Southern Area champion Greene (12-1, 7 KOs) for the vacant WBO European welterweight title at Production Park Studios in Wakefield on August 26 – live in the US on ESPN+ in association with Top Rank, and worldwide on IFL TV.

The fight serves as the toughest test of Crocker’s career so far, but the Belfast star is relishing the challenge and feels it’s going to result in a fight to remember.

Crocker said: “I’m excited to be back, especially because it’s headlining my first show too. I’ve been busting for a fight for a while, so to be competing for a WBO European title is a big step up.

“With everything that’s going on in the world it’s truly great to be part of a show, so fair play to MTK Global for getting these class events together throughout August and September.

“Louis Greene is a solid opponent and has fought at a higher level than me and is ranked higher than me, so I’m expecting my toughest fight to date. I’ve always wanted to fight for a title, and you can definitely guarantee that there will be fireworks on August 26th.”

Unbeaten Scottish star Lee McGregor is ready to kick on and achieve big things over the next year – and that starts when he faces Ryan Walker on Wednesday’s huge #MTKFightNight.

British and Commonwealth bantamweight king McGregor (8-0, 6 KOs) steps up to 122lbs to take on former Southern Area super-bantamweight champion Walker (11-1, 2 KOs) on a massive card at Production Park Studios in Wakefield – live in the US on ESPN+ in association with Top Rank, and worldwide on IFL TV.

It is McGregor’s first fight back since his historic battle with Kash Farooq at a sold out Emirates Arena in November 2019, and the Edinburgh man wants more occasions like that.

McGregor said: “I can’t wait to be back. A win in this fight gets me back in the swing of things and then we can crack on and possibly get a defence of my titles in before the end of the year too.

“Then the plan is to push on for a big 2021. It was a brilliant win in my last fight against Kash Farooq and the whole experience was unbelievable, so I want to have nights like that again as I love being involved in them.

“It’s been a tough few months for everyone but I’ve tried to take the positives out of it. I was out in Fuerteventura for a bit doing some training with Josh Taylor and Billy Joe Saunders, and that was brilliant out there.

“They are two amazing fighters and world champion, so I couldn’t have asked for better fighters to train alongside. I picked up a lot over there, and I’ll show that in this fight.”

McGregor vs. Walker is part of a huge bill on Wednesday, which also features Lewis Crocker and Louis Greene clashing for the WBO European welterweight title, plus Darren Tetley and Liam Taylor meet in a British title eliminator.

It’s part of a huge week of #MTKFightNight events, as on September 2, Akeem Ennis Brown and Philip Bowes clash for the British and Commonwealth super-lightweight titles, and Dan Azeez defends his English light-heavyweight crown against Andre Sterling.

Aged 15-19 and want to enter the world of boxing as a fighter, coach, referee, cutsperson, promoter, event coordinator, journalist and everything in between? Sign up for the #MTKAcademy now: www.academyse.co.uk/mtkacademy